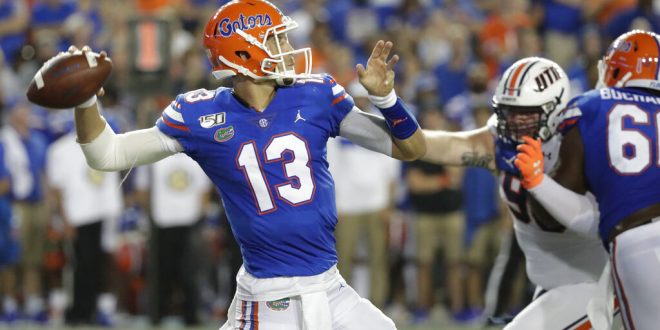 Feleipe Franks‘ doubters will have to find a new hobby this coming week. The reason being is that there wasn’t much to complain about in terms of Franks’ performance Saturday night.

The Gators starting quarterback led his team to their second win of the season in a 45-0 rout of Tennessee Martin in the home opener.

Slow and steady wins the race

The Gator offense started the game at a crawling pace — only coming away with a field goal in their opening drive. On their next possession, the Gators failed to convert on fourth and two and handed the ball back over to the Skyhawks new mid-field.

Nonetheless, those two drives ended up being no indication to what Franks and the Gator offense had in store for the remainder of the game.

The rest is history. Literally.

To start the night, Feleipe Franks went on to complete his first 15 passes — one after another. This is a feat that hasn’t been accomplished since 2005 when Chris Leak was taking snaps for the Gators.

When asked if he’d ever completed that many passes consecutively, he knew the answer.

Franks was just one play away from having a flawless first half. However, his hot streak ended when he heaved a pass to the right corner of the end zone as time expired to take the teams into the locker room at half time.

Franks finished the half 15-for-16 with 183 passing yards and two touchdowns. While Franks wouldn’t generate any other passing touchdowns throughout the game, his stellar performance was far from over.

Feleipe Franks went on to complete passes to 10 different Gators throughout the night as he completed 25 of his 27 passing attempts.

Last year at Mississippi State, Franks’ completed 22 passes — a career high for him. On Saturday night, Franks tacked on three more completions to that number, resulting in a new personal best of 25 completions.

Franks also bested his longest pass of 66 yards, a high accomplished just weeks ago against Miami. With 8:35 to play in the second quarter, Franks connected with Van Jefferson for a 69 yard touchdown pass.

As the long pass to Jefferson progressed, Franks was able to sit comfortably in the pocket before delivering the strike — all thanks to the improving offensive line.

Above all his accomplishments Saturday night, one stat that will really irk those who doubt Franks’ abilities, is the fact that Franks surpassed every Gator quarterback in history in one area.

After Saturday’s outing, Feleipe Franks now holds the Florida Gator football record for the best passing percentage in a game with a boisterous 92.9% efficiency.

Ainslie is a journalism major at the University of Florida where she specializes in Sports Media. Her main passion is college football as it was a huge part of her childhood. Ainslie serves as a current correspondent for the Ocala Star-Banner, a newspaper for the Ocala, Florida area. She currently covers Marion County high school sports.
Previous Florida State Ties Up All-Time Series Record Against Florida
Next Gators shutout Skyhawks in home opener, 45-0