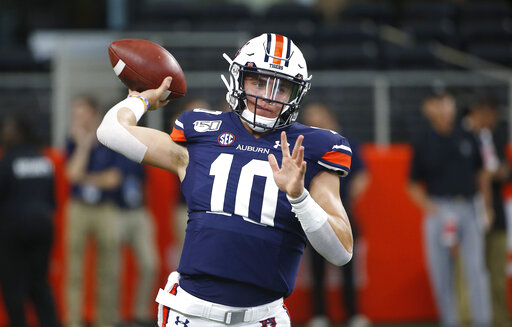 The N0. 8 Auburn Tigers host the Kent State Golden Flashes on Saturday, September 14 at 7:00 p.m. It will be the first time ever that the schools’ football programs face each other.

The game will also be Auburn’s final non-conference game until they face Samford on November 23rd. With next weekend’s trip to Texas A&M kicking off SEC play for the Tigers, coach Gus Malzahn hopes that this matchup will help the team prepare for their conference foes.

Undefeated through their first two games, the Tigers hold the eighth spot in the AP Top 25 rankings. Two weeks after leading Auburn to a comeback win against No. 11 Oregon, freshman quarterback Bo Nix gets his third career start against a Kent State defense that has only allowed two passing touchdowns all season. Nix currently has the eighth-most passing touchdowns in the SEC and the most interceptions.

After missing most of last season to an injury, junior wide receiver Eli Stove leads the team in touchdowns with two. Senior wide receiver Will Hastings leads the team in receiving yards with 113. Between him and Stove, Nix should have plenty of options to throw to. Redshirt sophomore running back JaTarvious Whitlow should also be a huge factor. Whitlow is a featured player in the Auburn offense, as evidenced by his conference-leading 47 rushing attempts.

Defensively, the Tigers have not proven to be among the SEC’s elite. Despite winning their first two games by a combined margin of 24 points, they are eleventh in sacks and tenth in tackles within the conference. Senior defensive back Jeremiah Dinson leads the team in tackles and sacks, while no other player has recorded more than half a sack. Senior defensive end Marlon Davidson is coming off a productive game against Tulane last week and should continue to be a factor for the Tigers’ defensive line.

Getting after the quarterback wasn't a problem for Marlon Davidson in Week 2. pic.twitter.com/rHYTMK7qDy

Despite facing the possibility of a blowout, Auburn should expect a packed stadium because of Homecoming. The Kent State game will mark Auburn’s 103rd Homecoming Week, and Auburn has already unveiled the uniforms they will be wearing to celebrate the occasion.

After losing to Arizona State 30-7 in their season opener, the Golden Flashes bounced back with a 26-23 victory against Kennesaw State last week.  Junior quarterback Dustin Crum has 189 passing yards and a touchdown this season, as well as 45 rushing yards and a touchdown, too. Crum was originally the team’s backup, but a poor performance from Auburn transfer Woody Barrett in the season opener led to Crum getting the start against Kennesaw State. As of Friday, there has been no word on who the starting quarterback will be, but Auburn coach Gus Malzahn is not taking any chances.

“We’re preparing for both to play,” Malzahn said. “That’s the way you’ve got to go about it.”

While there is uncertainty surrounding the quarterback position, there is no question that Jo-El Shaw is Kent State’s top running back. The senior running back has racked up a team-high 160 rushing yards while scoring once. Sophomore wide receiver Isaiah McKoy is arguably the team’s biggest offensive threat as he leads the Golden Flashes in receiving yards and touchdowns. He has the 2nd-most receiving touchdowns in the MAC.

Two games into the season, Kent State leads the MAC in sacks with seven. Senior defensive lineman Theo Majette has three of those sacks, enough to lead all MAC players. Junior cornerback KJ Sherald also has a sack as well as an interception. He is the only player to record a pick for the Golden Flashes thus far.

Theo Majette wreaked some havoc for Kent State last season and is back to do it again. pic.twitter.com/bcTTacRrkv

Kent State travels to Auburn as 35.5-point underdogs, but there is hope for the Golden Flashes. While Auburn’s Nix has been sacked just once this season, Kent State’s defensive line has shown an ability to disrupt the offensive line. In the Arizona State loss, the Golden Flashes recorded five sacks. Not to mention that Nix’s collegiate inexperience could be a factor. After all, Nix is the first true freshman quarterback to start for an SEC team in 15 years. If the Golden Flashes are to pull off the colossal upset, they will need to create constant pressure on Nix.