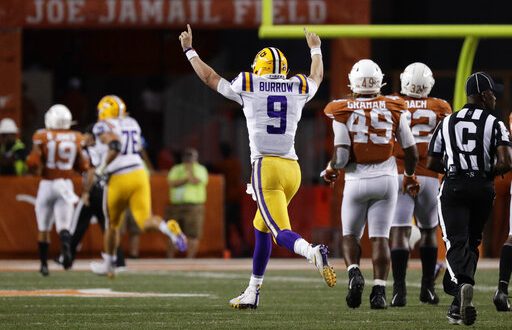 Busy Week for LSU Leads to an FCS Showdown

The LSU Tigers were one of the most talked about college football teams this past week.

The No. 4 Tigers (2-0, 1-0 SEC) defeated then-No.9 Texas in a 45-38 showdown at a hostile Royal-Texas Memorial Stadium. After the win, Coach Ed Orgeron talked about the lack of air conditioning in the Longhorns’ visiting locker room, and the media had a field day. Now, LSU looks forward to the weekend and its match against the Northwestern State Demons.

This week’s matchup is the Tigers’ easiest of the season by a large margin, making way for its difficult upcoming slate of three top ten teams in Florida, Auburn and Alabama in the coming months. LSU should handily win this football game against its lesser FCS opponent. The question coming into the game likely isn’t who will win, but rather how long it will take the Tigers to put the game out of reach from the Demons (0-2). Coach Orgeron said his team had a great week of practice and is excited about the opportunity for the team to get better following the victory over the Longhorns.

Taking It to the Next Level

Joe Burrow impressed many in prime time, sporting the best game of his career in an LSU jersey. The senior quarterback threw for 471 yards and four touchdowns with an interception, completing 31 of 39 passes and finishing with an 88.6 QBR rating. He connected with three different receivers at least six times, leading to 100-plus yards of receiving yards for Ja’Marr Chase, Terrace Marshall Jr., and Justin Jefferson — who finished the day with three touchdowns. One thing Coach O wasn’t satisfied with, however, was their protection for Burrow. Texas compiled four sacks on LSU, while the Tigers ran for just over 100 yards on the ground. Orgeron sees a clear path to how his team can continue improving as the season progresses.

LSU will look to avoid injuries and improve on its play from last week, all while maintaining its newly acquired momentum as the No. 4 seed.

LSU is also debuting a new uniform colorway this weekend against the Demons that’ll have prideful Tiger fans salivating at the mouth.

LSU will don the alternate purple home jersey its worn in limited games in past seasons, while spicing it up with a white helmet. The White-Purple-White combination is one that is sure to draw some fans’ eyes as the Tigers beat down their FCS opponent.