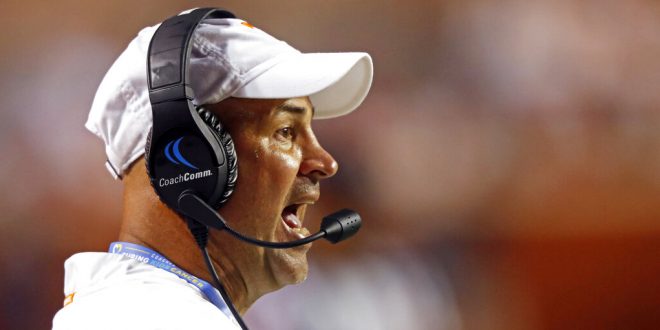 Tennessee head coach Jeremy Pruitt yells to his players in the second half of an NCAA college football game against Brigham Young Saturday, Sept. 7, 2019, in Knoxville, Tenn. (AP Photo/Wade Payne)

Times are desperate for the Tennessee Volunteers. They need a win over the UT-Chattanooga Moccasins before starting their conference schedule or they’ll fall to 0-3.

Volunteers’ Head Coach Jeremy Pruitt said his team practiced well all throughout fall camp and the current situation applies to everyone from coaches to players.

Pruitt said his team did a better job of both running the ball and defending the BYU run game. He said his team improved in effort, communication and toughness on both sides of the ball.

However, are the Vols where they need to be in Pruitt’s eyes? Not at all. Pruitt cited critical mistakes that made the difference between the Vols being winless and them being undefeated.

Pruitt on what needs improvement:

The coaching staff was more technical in correcting the mistakes from the overtime loss against BYU.

Familiarity with the Moccasins

Tennessee’s head man said he remembered when Chattanooga head coach Rusty Wright played tight end for the Mocs in the 90s. He’s very familiar with both of UTC’s coordinators, Joe Pizzo and Lorenzo Ward, and cited that the Mocs do an outstanding job on both sides of the ball.

Although, the Moccasins have allowed on average 430 yards of offense in their first two games. They surrendered 509 yards to Jacksonville State in a 41-20 loss. However, the college football season is still only two games old.

“You know, the last four FBS opponents they’ve played, they’ve held a lead in three of the games,” Pruitt said.

UTC was outscored 128-19 in those three games Pruitt mentioned.

Pruitt on the Mocs:

Chattanooga’s senior quarterback Nick Tiano accounted for three scores in his first two games but also threw two interceptions against Eastern Illinois. Wide receiver Bryce Nunnelly had at least six catches in each of the team’s two games, and running back Ailym Ford has recorded at least a touchdown and ten carries in both games.

A loss would put the Vols at 0-3 heading into the Swamp to face the Florida Gators. After that, they’ll turn around to face Georgia and Mississippi State in Knoxville. They will then finish out their horrid four-game stretch with the Crimson Tide in Tuscaloosa.

They could realistically go 0-4 or 1-3 against those teams, which would put them at 0-7 or 1-6 by late October. With wins hard to come by in the rest of September and heading into October, the Vols will need one Saturday afternoon.

The Vols and Mocs kick off on Saturday at 12 p.m. ET from Knoxville.