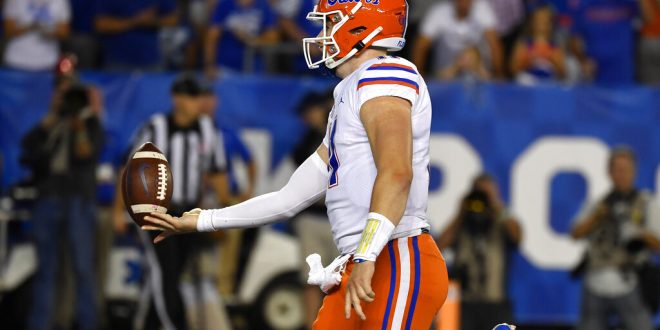 Florida quarterback Kyle Trask (11) flips the ball in the air after running in for a touchdown during the second half of the team's NCAA college football game against Kentucky in Lexington, Ky., Saturday, Sept. 14, 2019. Florida won 29-21. (AP Photo/Timothy D. Easley)

The number-9 ranked Florida Gator football team comes back from being down 21-10 to win 29-21 in its SEC opener on the road at Kentucky Saturday night.  At times, the victory looked to be in doubt.

Florida took the lead early on a 15 yard touchdown pass by quarterback Felipe Franks to Freddie Swain to make it 7-0 with 6:27 left in the first quarter. The score would remain the same until the second quarter when Kentucky quarterback Sawyer Smith connected with Ahmad Wagner for a 26 yard touchdown pass to tie the game 7-7. Later in the quarter, Smith would take the ball into the end zone himself for a touchdown to make it 14-7 Kentucky.

Florida then missed a 27-yard field goal try, Evan McPherson‘s first miss from less than 30 yards away. At halftime, the score was Kentucky 14, Florida 7.

McPherson would redeem himself with a 32 yard field goal to make it 14-10 Kentucky. The Wildcats immediately answered with a 13 yard touchdown pass by Smith to Keaton Upshaw to make it 21-10.

With 3:21 left in the third quarter, Gator quarterback Feleipe Franks failed to convert on fourth down and was sandwiched between two Kentucky players. That would be Frank’s last play of the game. Minutes later, he would be carted off the field with a brace around his left knee.

Senior Columnist for Saturday Down South, Connor O’Gara posted a clip of Frank’s injury on his twitter page.  Gator coach Dan Mullen says Franks is likely out for the year.

With Franks out, Mullen called on Kyle Trask. The 6-foot-5 junior out of Manvel, Texas completed four of five pass attempts against UT Martin the week before. However, Trask was in for a single drive when the Gators were already up 38-0. This time, Mullen called upon Trask to keep Florida in the game. At this point in the game, Kentucky had a 86.6 percent chance to win. By the time there was 1:05 left in the third quarter, the odds grew to 92.9 percent. Trask and the Gators didn’t back down.

Comeback in the Fourth

The Gators scored 19 unanswered points in the fourth quarter. The rally started when Trask flipped the ball to running back Lamical Perine just before he was sacked and Perine carried the ball eight yards for a touchdown to make it 21-16 Kentucky. The Gators went for the two-point conversion and missed.

At this point, Mullen said he realized he was in a similar situation in last year’s Kentucky game.

Last year when the score was 21-16 Kentucky, Kent Davonte Robinson recovered a fumble by Felipe Franks and ran it back for a touchdown as time expired in the game to seal a 27-16 Kentucky victory. This year, the Gators scored on a touchdown run by Kyle Trask to make it 22-21 Gators.

The Wildcats had a chance to take the lead with less than one minute left on the clock, but Chance Poore missed a 35-yard field goal attempt. The Gators looked like they would simply try and kill the clock. Then wide receiver Josh Hammond took the ball on an end around and ran it in from76 yards to extend the Gator lead to 29-21.

Down eight, Smith attempted to lead the Wildcats downfield one last time but his desperation pass was intercepted by freshman cornerback Kaiir Elam to end the game.  It was Smith’s third interception of the night.

Looking Back at the Game

In a game where the story was about Kentucky’s back up quarterback, the Gators staged a comeback with their own back up.

Trask said it was tough for the Gators to lose Franks but he’s proud of the team for refusing to back down.

Harrison is a sports coordinator at ESPN 98.1 FM/850 AM WRUF. He served as a beat writer for Florida Gators football for the 2019 and 2020 seasons. He also contributes to WRUF's Gainesville Sports Center segments and makes appearances on the Clash on Harp on Sports. Harrison has been a content writer for WRUF since January 2019 as well.
@HarrisonSmaj
Previous Florida Gators Face Miami Hurricanes
Next Gators Use Strong Second Half to Down Miami 3-0