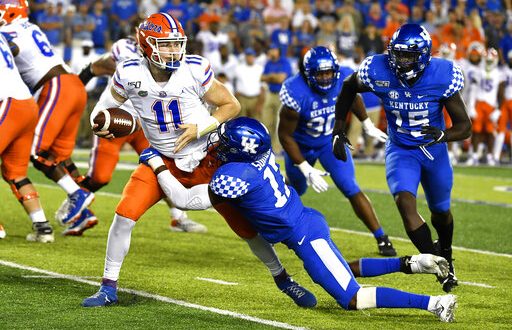 Coming off of a rallying win against the Kentucky Wildcats, Florida Gators head ball coach, Dan Mullen spoke about the team’s injuries, quarterback situation, and the upcoming game against Tennessee. Florida comes off the weekend with a 29 – 21 win over Kentucky, but not without a cost. Mullen spoke about how the two backup quarterbacks will be introduced against Tennessee. Additionally, he gave an updated injury report on some key players.

Dan Mullen spoke to the media detailing certain key players’ injuries and if they are fit to return:

If you wish to view footage of Franks’ injury from Saturday’s game click here.

According to Mullen, Franks is suffering from a dislocated ankle as well as a fracture. An injury as serious as this means Franks will be sitting out for the remainder of the season. He is expected to undergo surgery next Monday, with an estimated recovery time of about 6 months. Despite the setback, Florida still has football to play and seems to have a more than capable backup quarterback to fill Franks’ shoes.

Mullen expects Burney, a sophomore, to return this weekend against Tennessee.

Henderson missed the game against Kentucky on account of an ankle injury. According to Mullen, he is not going to be practicing as much this week due to his veteran status as a player. Despite this, he is “on the edge” as to whether he will return to play.

As with Henderson, Zuniga is in the same sort of situation as to whether or not he will be playing against Tennessee. The senior defensive lineman suffered a foot or ankle injury early in the game against Kentucky on Saturday. Zuniga later came back in the game early in the second half before exiting again. Without him on the field, Florida loses an essential pass rush asset on the defense.

Franks suffered his injury in the third quarter while the Gators trailed the Wildcats by 11 points. Filling in for Franks was junior Kyle Trask, who drove the Gators downfield for a walk-in touchdown in the fourth quarter. Mullen told ESPN: “Kyle was waiting for his moment,” Mullen told ESPN. “The team believes in him and we believe he’s a starter, just like Feleipe is…There was never a doubt he could do the job.”

The head ball coach plans on playing both Trask and redshirt freshman Emory Jones in the upcoming game against Tennessee and doesn’t expect the offensive strategy to change much.

The two-quarterback system is expected to work well against the Vols, with claims that it will be harder to defend against.

“It will be a lot harder for a team to game plan against the two of them than just to prepare for one of them,” senior wide receiver Josh Hammond said.  “We will be able to play both of those guys this weekend and they’ll both be prepared and ready to make plays for us on offense.”

Florida takes on the Tennessee Volunteers (1 – 2) at home on Saturday at noon.