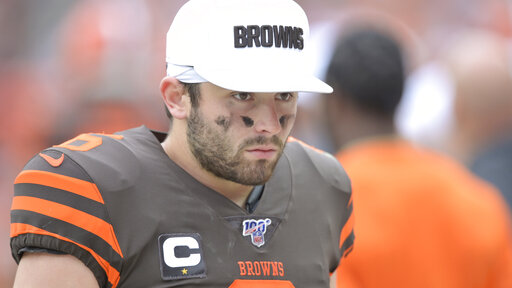 Monday Night Football will see the Cleveland Browns and the New York Jets face off at MetLife Stadium. Both teams are seeking their first win of the season.

Although the Jets will have key players out, including quarterback Sam Darnold who has mono, the Browns can’t overlook them. There are a couple of things they’ll need to come away with a victory.

Baker (and the Offense) Bounces Back

Browns quarterback Baker Mayfield had a rough start to the season in the blowout loss to the Tennessee Titans. While he had a 65.8 percent completion rate, he also threw three interceptions in one quarter. His offensive line had a difficult time, too, as Mayfield was sacked five times for a loss of 41 yards.

But the second-year quarterback knows the offense can be better. And he knows where it needs to start.

“It ultimately comes back on me,” Mayfield told cleveland.com. “I need to get everybody on the same page.”

The Austin native posted a hype video for Monday night’s game on his Instagram with the caption, “Don’t flinch against adversity. Room full of savages.”

The Browns had 18 penalties for 182 yards in Week 1 at FirstEnergy Stadium. It was the second-most penalties in franchise history. More than half were from poor technique.

But it’s the other eight penalties that are more concerning. Those resulted from a lack of discipline. Left tackle Greg Robinson was ejected for kicking Titans’ safety Kenny Vaccaro in the face, defensive end Myles Garrett shoved a hand in Titans’ tight end Delanie Walker’s face. Devaroe Lawrence directed an obscene word at an official. The penalties cost the three players nearly $50,000 in fines from the league.

Excessive penalties, especially ones that are 15 yards apiece, can play a large role in a team’s loss. And if the Browns hope to come away with a victory against the Jets, the selfish penalties cannot continue.

“We need to play smarter,” Browns head coach Freddie Kitchens told WKYC. “That is what we need to change moving forward.”

Camille Woodhouse is a Sports and Media student at the University of Florida College of Journalism and Communications. In the past, she has covered the Atlanta Falcons and Florida Gators football for various sports news outlets. She is an Atlanta native and a fan of football.
@CJW_SportsRadio
Previous Dan Mullen Talks Injuries, Quarterbacks and Tennessee
Next Florida Volleyball Hosts Florida State in Sunshine State Showdown