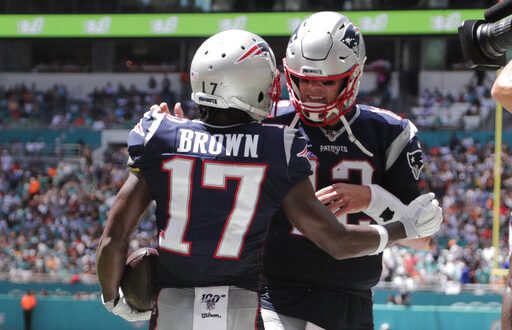 Tom Brady and the New England Patriots enjoyed a dominant victory over a struggling Miami Dolphins team by a score of 43-0 in the Week 2 divisional matchup.

Coming off a Super Bowl victory, the New England Patriots have continued to assert their dominance over the NFL this season. The Patriots defeated the Steelers 33-3 in Week 1. The Patriots entered Week 2 as overwhelming favorites. In addition, the team also activated the newly acquired Antonio Brown on Sunday.

After a historically bad Week 1 loss, The Dolphins hoped to improve heading into Week 2. Miami lost to the Ravens 59-10. However, no part of the team looked improved against the reigning champs. Miami came into Week 2 looking to pick up their first win of the season against their divisional rival.

It's been a rough start to the Dolphins' season to say the least.

The Patriots offense has performed at an elite level so far this season. They’ve put up 76 points thus far, and 43 of those points came in the victory over the Dolphins. At 42 years old, Brady threw for 264 yards and two touchdowns to give himself a QBR of 124.7.

The Patriot offense controlled the game, accumulating 381 total yards, with 255 of those yards being passing and 126 being rushing. The Patriots converted 27 first downs, while only turning the ball over once on Sunday.

Dolphins’ quarterbacks Josh Rosen and Ryan Fitzpatrick struggled to keep the ball out of the Patriots defenders’ hands, combining for four interceptions in the 43-0 loss.

Ryan Fitzpatrick got the start for the Dolphins and showed none of his “Fitzmagic” in the game. Fitzpatrick threw three interceptions and finished with an abysmal QBR of 23.8 on Sunday. Relieving Fitzpatrick in the third quarter, Josh Rosen did not perform much better finishing the game with an interception and QBR of 33.8.

How can you not use Josh Rosen after this performance by Ryan Fitzpatrick? back to back drives with pick-6 and they only had 38 yards through 3 quarters earlier in the game.

After being cut by the Raiders two weeks prior, newly signed wide receiver Antonio Brown got his first start of the season. Brown shined with Brady, finishing the day with four receptions for 54 yards and a touchdown. Brown lead the Patriots with eight targets.

In their third meeting of the season with the Tampa Bay Buccaneers, the New Orleans …