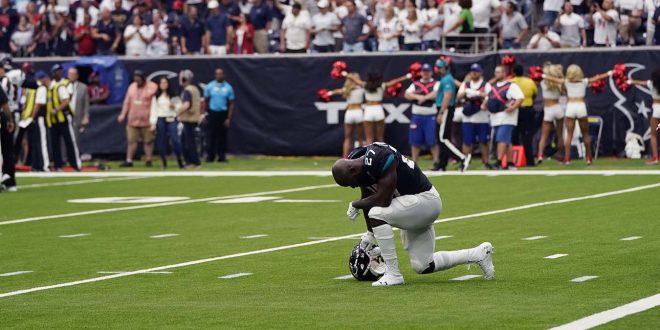 Jacksonville Jaguars running back Leonard Fournette (27) reacts after he was held short of the goal line on a two-point conversion attempt against the Houston Texans during the second half of an NFL football game Sunday, Sept. 15, 2019, in Houston. (AP Photo/David J. Phillip)

The Jacksonville Jaguars were close, but not close enough.

Quarterback Gardner Minshew and the Jaguars nearly pulled off a crazy comeback against the Texans, but weren’t able to do it after a failed two point conversion with 30 seconds to go.

Minshew showed a glimpse of hope in his first career start after going 23-33, 213 passing yards, one touchdown and no interceptions. Minshew led the Jags on a 68-yard touchdown drive that included an 18-yard scramble on 4th and 10.

Jaguars head coach Doug Marrone then tried to get the win with a two-point conversion. However, after review, running back Leonard Fournette was not able to get into the end zone on the play.

Minshew also had three fumbles, but Jacksonville was able to recover two of them. Though the offense had issues, the defense showed signs of improvement  after limiting the Texans to just a total of 263 yards, compared to 491 yards Houston racked up last week.

Injuries have also plagued Jacksonville with seven players out, including three starters. Starters Yannick Ngakoue, Marqise Lee and AJ Bouye were all out Sunday.

Calais Campbell had also been dealing with a leg injury all week that limited his impact during the game.

Nick Foles is also expected to be out until at least November with a collar bone injury sustained last game.

Finally, a confrontation between corner back Jalen Ramsey and Doug Marrone sparked up on the sideline, forcing the two to be separated.

The Jacksonville Jaguars look to bounce back against the Tennessee Titans in a home conference game Sunday after falling to 0-2 on the season.