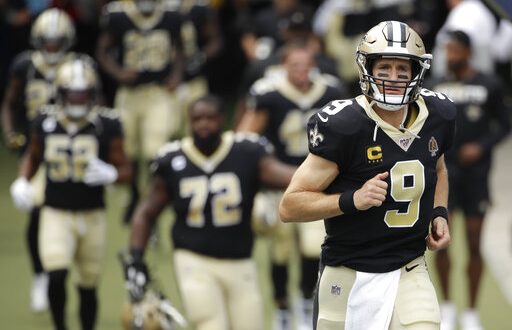 The New Orleans Saints lost quarterback Drew Brees to a hand injury in Sunday’s 27-9 loss to the Los Angeles Rams. After a controversial finish to their NFC Championship matchup last year, the Saints wanted revenge. However, now all they can think about is the severity of Brees’ injury.

The latest reports from NFL media indicate that Brees is expected to undergo thumb surgery, keeping him sidelined at least six weeks.

Saints' QB Drew Brees is expected to undergo thumb surgery as early as today that would be expected to sideline him approximately 6 weeks, per leagues sources.

The injury occurred when Rams defensive lineman Aaron Donald swatted Brees’ hand during the follow through of a pass. Immediately after the play, Brees came off the field to be replaced by backup quarterback Teddy Bridgewater. Soon after, cameras showed him on the sideline with a ball cap and some tape wrapped around his hand.

This is the play where #Saints QB Drew Brees got injured.pic.twitter.com/GyQcKC0EAW

Bridgewater, a former Minnesota Vikings starter, continued to play the rest of the game.

The Epic Duel That Never Was

A year later, and the Saints came into the season with a chip on their shoulder, ready for a rematch with the eventual 2019 NFC Champion Los Angeles Rams. After Brees’ early exit, though, this game failed to live up to the expectations set after last year’s game.

Bridgewater, who has only 55 passing attempts dating back to 2017, lacked the game experience to face a stout Rams’ defense. After a slow start, Rams quarterback Jared Goff heated up in the second half, running the ball in for a score, and connecting with Brandin Cooks for a passing touchdown. Goff finished 19 for 28 with 283 yards and 2 total touchdowns, and the Rams ran away with the game in the second half.

After last year’s officiating blunder, the Saints were hoping for a clean game, leaving those mistakes in the past. However, in the second quarter, there was another obvious mistake.

With the game tied 3-3 and the Rams in the red zone, Goff fumbled the ball on a pass attempt. Saints defensive end Cam Jordan scooped the ball up and took it 89 yards to the other end zone. The only problem was the referees blew the play dead, calling the motion an incompletion.

Upon further review, the original call was overturned. However, since the referees blew the play dead, the referees could only give the Saints the ball on their own 11-yard line.

Saints head coach Sean Payton was understandably irate, especially after last year’s costly mistake. Even FOX commentator Joe Buck could not believe the Saints misfortune. During the broadcast, Buck said, “How many times can this happen to the Saints? Unbelievable.”

Horrendous call by the refs. Play being blown dead, takes a TD away from the #Saints.

Outlook for Both Teams

The Rams have a great outlook for the rest of the season, starting 2-0 after defeating the Panthers and Saints. Jared Goff looked much sharper in week 2 after throwing an interception and completing 59 percent of his passes against the Panthers in Week 1.

On the flip side, the Saints have a considerably murkier outlook. However, the Drew Brees news certainly doesn’t mean their season is over. Teddy Bridgewater has starting experience with the Vikings, and the Saints still have a lot of offensive weapons. Head coach Sean Payton tried to stay positive about his new starting quarterback after the game on Sunday.

The Saints certainly don’t have an easy draw going forward, as they travel to play the Seahawks next week and host the Cowboys in Week 4. But Bridgewater has his work cut out for him and he knows what he has to do to keep winning games going forward.

I'm a third-year student at the University of Florida passionate about storytelling and sportswriting. My goal is to work in communications for a professional sports team after I graduate.
Previous Jaguars can’t complete comeback against Texans; lose 13-12
Next Rays at Dodgers Preview: Snell Returns After Surgery