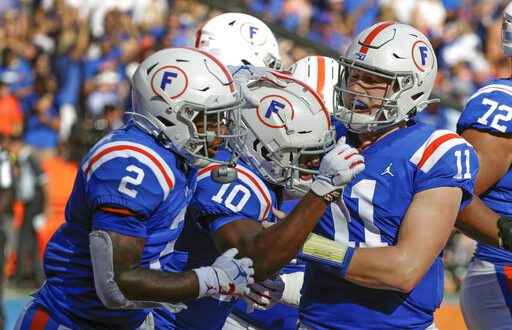 Florida wide receiver Josh Hammond (10) celebrates with running back Lamical Perine (2) after catching a touchdown pass against Auburn during the first half of an NCAA college football game, Saturday, Oct. 5, 2019, in Gainesville, Fla. (AP Photo/John Raoux)

Gators Sink Auburn In The Swamp 24-13

It was a drunken first half. Spectators were tipsy on turnovers and dizzy on defensive battles.

The ebbs and flows of Florida’s homecoming win against Auburn were hypnotizing. Exhausting. Electric.

“Just a regular game in The Swamp,” Florida coach Dan Mullen chuckled following his Gators’ 24-13 win over the Auburn Tigers.

If this is a regular game in The Swamp, then any visiting team that comes to Gainesville is in for nasty surprise. Ben Hill Griffin Stadium packed in over 90,000 fans for Saturday’s game — the highest attendance number since 2015.

Florida came out swinging — they jabbed at Auburn’s offense and forced them to punt early.

Kyle Trask and the Florida offense then delivered the hay maker on a Kyle Trask-to-Freddie Swain connection. Swain’s slant across the middle was good for a 64-yard passing touchdown.

Nothing out of the ordinary there — yet.

Later on in the first quarter, Kyle Trask took a big sack. This caused the redshirt-junior to cough up the football and hand it right over to quarterback Bo Nix and the Auburn offense.

Auburn would go on to put three points on the board before Dameon Pierce was whacked with a nasty hit that Dan Mullen challenged for targeting. Little did Mullen know, targeting, or in this case, the lack thereof, can’t be challenged.

When the collision occurred, Pierce lost control of the football — gifting it back to Nix and co..

Down 0-2 in the turnover battle, Florida’s special teams unit finally looked to gain traction. They recovered a Tommy Townsend punt, which was muffed by Auburn’s return man.

Shortly after the Gators’ muff recovery, Trask lost the ball again as it fell out of his grip, only for the Tigers’ Bo Nix to throw an interception to Shawn Davis.

In case you lost count, that was four turnovers in a matter of just 16 minutes of football — and it’s impressive that those turnovers didn’t have more of an impact on the game.

Coming into the game, everyone knew that both the Gators and the Tigers has solid defensive units on their sideline. Specifically on the defensive front.

Ahead of the 3:30 kickoff, ESPN’s College GameDay was in Gainesville where much of the talent, especially David Pollack and Desmond Howard gushed over Auburn’s defensive front.

On Saturday night, despite the loss, Auburn once again showed why they are in contention for one of the most elite defenses in the country. The Tigers combined for four sacks and seven tackles for a loss in addition to the four forced fumbles.

However, while Florida’s defense wasn’t the talk of the town before the game, they certainly were after.

The Gators have taken a lot of pride in their red zone defense efficiency — a stat line that Florida led the country in as of last week.

Unless something crazy happens in other games around the country, Florida should remain the leader in that stat line. The Gator defense gave up zero points in the red zone on Saturday.

However, it wasn’t necessarily the Gator defensive line that was the story of the night — instead, it was the defensive backs.

The Gators returned CJ Henderson after not having him since the UT-Martin game. Henderson and the other defensive backs all played to a high standard. A standard that is necessary for a unit vying for the title D.B.U..

Florida’s defensive back unit combined for three interceptions on Saturday — ruining Bo Nix’s chance of beating the Gators just like his dad did in 1994.

One of those interceptions came in acrobatic fashion as Shawn Davis hauled in a one-handed grab early in the second quarter:

After Saturday’s smothering, the Gators’ defense will no longer be flying under the radar.

It’s been documented that Auburn wasn’t all that interested in running back Lamical Perine during his recruitment because he was “too slow”.

As a result, Perine’s had a bad taste left in his mouth — one that could only be rid of by proving Auburn wrong.

Well, Tigers — when Lamical Perine took off from his own 12 yard line and rushed for 88 yards to the opposite end of the field, I didn’t seen anyone catching him.

I did, however, see lots of white jerseys chasing him — trying to stop the dagger-of-a-touchdown from being scored.

The Florida run game is mediocre so far this season. However, with Perine’s big run on Saturday, it shows that not all hope is loss when it comes to the Gator rushing attack. The Gator backs mustered 132 yards today.

Ainslie is a journalism major at the University of Florida where she specializes in Sports Media. Her main passion is college football as it was a huge part of her childhood. Ainslie serves as a current correspondent for the Ocala Star-Banner, a newspaper for the Ocala, Florida area. She currently covers Marion County high school sports.
Previous Gators’ Offensive Toughness Shines In Season Defining Auburn Win
Next Top-Of-The-SEC Aggies Visit Gators