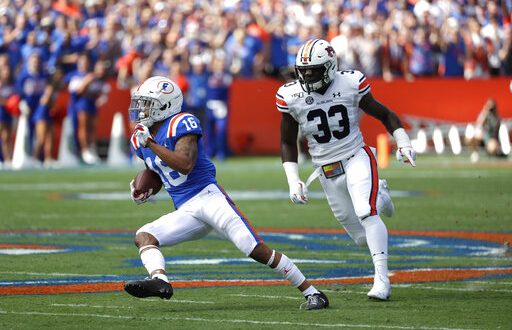 Florida wide receiver Freddie Swain (16) runs past Auburn linebacker K.J. Britt (33) after a reception for a touchdown during the first half of an NCAA college football game, Saturday, Oct. 5, 2019, in Gainesville, Fla. (AP Photo/John Raoux)

In the wake of doubt and a decreasing ranking (despite perfection), the Florida Gators football team stunned college football once again.

The Gators have tough terrain to conquer — but they’ve nailed the beginning of it. Not with ease, but with a level of toughness only a top-10 team possesses. Entering the week, plenty of Gators expressed their displeasure toward their ranking entering the Auburn match up on Saturday.

October’s only home game was a chance to change an unfavorable narrative. It’s safe to say the landmark 24-13 win did just that. In what was supposed to be a low-scoring affair, the Gators offense had some notable bright spots.

Another weapon has stepped out of the woods for quarterback Kyle Trask in the form of Freddie Swain. The senior wide receiver had a stellar showing, further making a case for his reliability on Florida’s developing offense. Swain stiffed Auburn’s defense early, delivering a 64-yard touchdown in Florida’s first drive of the game. The play made quite the statement, but Swain’s impact didn’t end there. Swain’s dependability proved advantageous, with none of his six receptions falling under double-digits. He capped off the evening with 146 yards off those six receptions.

Swain spoke of the lasting effect his early touchdown had on the team’s offense.

But the offensive production didn’t end there. Running back Lamical Perine’s 2019 season perhaps hasn’t met expectations, but he unleashed a historical play on Auburn’s highly ranked defense. In the final touchdown of the day, Perine offered critics a piece of his mind with a monster 88-yard touchdown run, providing the longest rushing touchdown in the Swamp since Emmitt Smith in 1988.

When Trask went down with an injury in the second quarter, a metaphorical alarm rang through the Swamp. Despite a momentary break in the program, Trask was productive, throwing for 234 yards and two touchdowns. He found a sizable amount of those yards in tight end Kyle Pitts, who topped the night off with 65 yards and eight receptions.

Trask faced one of the toughest defensive lines of the season but offered nothing but praise for their grit.

Florida’s brutal stretch continues with LSU and Georgia on the schedule. A streak of perfection still under its belt, there’s a lot of work to get done to stay on top, starting with a game at LSU next Saturday night.