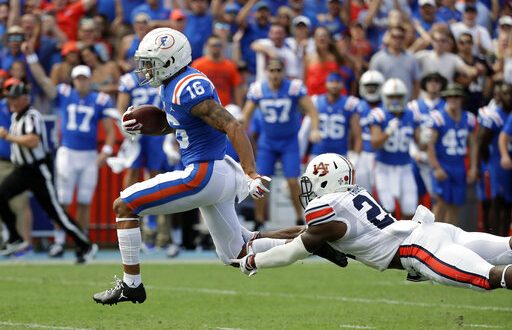 Florida wide receiver Freddie Swain (16) outruns a tackle by Auburn defensive back Daniel Thomas on his way to a 64-yard touchdown during the first half of an NCAA college football game, Saturday, Oct. 5, 2019, in Gainesville, Fla. (AP Photo/John Raoux)

Florida Gators head coach Dan Mullen spoke to the media on Monday afternoon to answer questions. During the press conference, he discussed Saturday’s game against Auburn. He also touched on his team’s expectations going into their upcoming game against LSU. For the first time since 2016, Florida football heads back to the bayou to take on the No. 5 LSU Tigers. On top of that, for the second week in a row, ESPN’S College GameDay follows Florida football.

The biggest takeaway from Saturday’s game as well as Mullen’s presser is that Kyle Trask only suffered a minor MCL sprain. Trask went down with a lower-body injury in the second quarter and was replaced by Emory Jones for a short while. Despite this, Trask made it back into the game on his own two feet. Mullen said that Trask will be ready to start Saturday’s game. Despite wearing a knee brace and compression sleeve, nothing will stop the redshirt junior from playing in Baton Rouge.

Aside from Trask’s knee scare, Florida walked away from Auburn fairly healthy. Defensive lineman Jabari Zuniga was kept out from play due to a worrisome ankle injury picked up back in Kentucky game. He was seen warming up and in pads but didn’t see the field during the game.

“We didn’t play Zu (Jabari Zuniga). He was available. He was cleared to play but I don’t think he was 100 percent. Going into the game, our thoughts were, ‘hey, if we cannot play him this week, gives him the opportunity to be 100 percent next week…,” Mullen said.

Mullen needs no reminder that his team is facing one of the deadliest offenses in the SEC at the moment. Scoring around 55 points a game, LSU has the ability to work the Florida defense. Nevertheless, Mullen is undeterred. He explains how he is confident that his team will be able to communicate and perform to their best abilities.

“In our program, we don’t work independently,” Mullen said. “Usually the game plans of the offense, defense, and kicking game all kind of mold together into what we need to do to be victorious.”

Also, he commented on the LSU team makeup, stating that the Tigers will be the toughest team Florida has faced yet. Mullen noticed some similarities the Gators share with LSU, such as building strategies around the players, rather than trying to force a round peg through a square hole. LSU has an elite offense. Solid, elite offensive line partnered with a skillful quarterback that can really sling the ball will prove to be a formidable force on Saturday.

“He’s played in a bunch of big games. He’s got great skill players around him and, you know, you can see his trust in those guys to go make plays out there. And then I think he’s deceptively, really athletic. So he can extend plays and he can make plays happen in the run game, if you’re gonna give it to him, he’s gonna take it. He’ll be the best quarterback we’ve faced so far this year and it’ll be a great challenge for our defense.”

The Florida Gators travel to Baton Rouge, Louisiana to take on the LSU Tigers in “Death Valley” Stadium on Saturday night. You can be sure to have all the coverage here starting at 8.