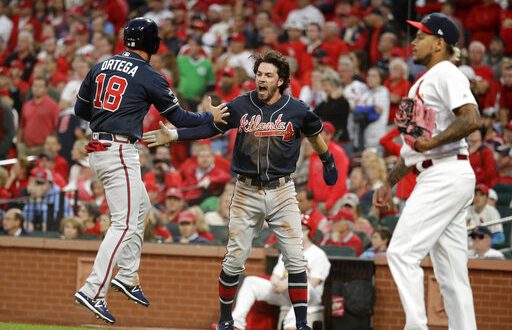 The Atlanta Braves stunned the St. Louis Cardinals with a 3-run ninth inning to rally for a 3-1 victory and a 2-1 series lead in the National League Divisional Series. Adam Wainwright could do no wrong, throwing 7 2/3 shutout innings for the Cardinals and recording eight strikeouts. However, Braves starter Mike Soroka threw a gem as well, giving up one run over seven innings and only allowing two hits.

After Cardinals pitching blanked the Braves for eight innings, it seemed St. Louis was headed towards a home playoff win and the NLDS series lead. But with two outs in the top of the ninth, the Braves proved you can never count them out of a game.

St. Louis closer Carlos Martinez came in for the save, but melted down after recording two early strikeouts. With two outs, Dansby Swanson hit an RBI double to tie the game at 1-1. Adam Duvall finished it off from there, scoring two runners with a double to center field and the Braves led 3-1.

Braves closer Mark Melancon entered in the bottom of the ninth to defend Atlanta’s two-run lead and he did just that. The Braves pulled off the unlikely comeback in front of a stunned crowd at Busch Stadium.

This game was a battle of two starters at the top of their game. The only real difference between the two was a Matt Carpenter sacrifice fly that put the Cardinals on top in the second inning. However, as the game went on, Soroka was able to place his pitches more effectively and keep batters guessing. At one point, he retired seventeen consecutive hitters.

Although many will point to the ninth inning heroics as the contributing factor, Soroka’s start was what kept the Braves in this game. Of course, the Braves starter hoped his effort on the mound would translate to a win.

Disappointment for the Cardinals

Wainwright was lights out on the mound for the St. Louis Cardinals, but in the end, their narrow lead wasn’t enough. With only two hits against Soroka, and four hits through the game, St. Louis simply needed more insurance runs.

Now, instead of playing with a 2-1 series lead in front of a home crowd, they’ll be staving off elimination at Busch Stadium in Game 4. Even if they do win Game 4, they’ll have to play the rest of the series in Atlanta.

For Atlanta, this win displays incredible resilience and an ultimate team effort. Without Soroka’s performance on the mound, three runs in the ninth would not have been enough. Without the late-game heroics at the plate, Martinez could have easily closed out the game.

Atlanta now carries all of the momentum and confidence into a must-watch Game 4 on Monday at 3:07 p.m. ET.

I'm a third-year student at the University of Florida passionate about storytelling and sportswriting. My goal is to work in communications for a professional sports team after I graduate.
Previous Preview: Yankees Look to Close Out the Twins
Next Dan Mullen Talks Auburn, Injuries and LSU Expectations