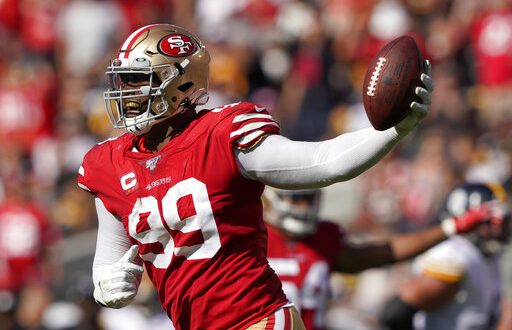 The Niners are entering Monday night’s game on a few high notes:

But to beat the Browns, remain undefeated, and make a statement, there are a couple things the Niners need to do.

Browns quarterback Baker Mayfield currently has the longest active streak of games with at least one passing touchdown. But he often scrambles out of the pocket unnecessarily, which is why he also has the longest game streak with an interception.

San Francisco has a strong defensive front that can either make Baker move or take him off his feet. Defensive Rookie of the Year candidate Nick Bosa has a team-high 17 quarterback pressures. And the team has a total of nine sacks so far this season, with linemen Arik Armstead, Dee Ford and DeForest Buckner tallying two apiece.

The Browns have given up three sacks per game for a total of 12 this season. And Bosa is no stranger to sacking Mayfield.

Browns first-year head coach Freddie Kitchens had something to say about the Niners’ highly ranked defense.

Rely on the Run

Under offensive-minded head coach Kyle Shanahan, the Niners are ranked second in the NFL in rushing with 175 yards per game. Running back Jeff Wilson Jr., an undrafted free agent, has only averaged 2.9 yards per carry. However, he is the only back on the roster who has a rushing touchdown. In fact, he has four.

Fellow backs Matt Breida and Raheem Mostert, also undrafted free agents, are the other workhorses. They have rushed for a combined 428 yards on 75 in three games. Both Breida and Mostert average more than 5 yards per carry. With Cleveland’s defense allowing 4.6 per carry, San Francisco’s backs could have a big game.

The Browns and Niners will kickoff at 8:15 p.m.

Camille Woodhouse is a Sports and Media student at the University of Florida College of Journalism and Communications. In the past, she has covered the Atlanta Falcons and Florida Gators football for various sports news outlets. She is an Atlanta native and a fan of football.
@CJW_SportsRadio
Previous Dan Mullen Talks Auburn, Injuries and LSU Expectations
Next Saints Baseball Competes In Double-Header With St. Johns River State Vikings