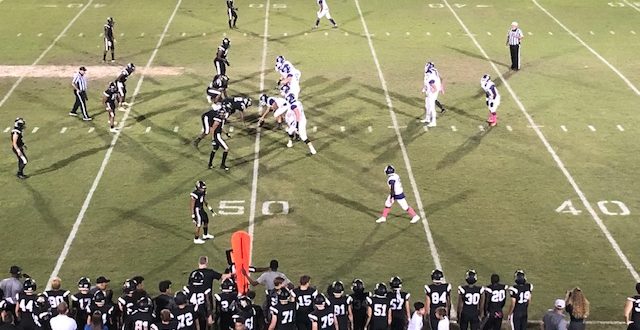 The Buchholz Bobcats (4-3) had no answers for Fletcher’s junior tailback Myles Montgomery.

Montgomery torched the Bobcats’ defense all night to a 41-17 victory. The Fletcher Senators rode their star running back all game and outscored Buchholz 34-7 in the second half.

Buchholz took the lead first with a field goal after a 12-play, 68-yard drive to start off the game.

Early in the second quarter, the Senators got on the board after Montgomery took a handoff 85-yards untouched to the house to make the score 7-3.

Buchholz head coach Mark Whittemore and his staff knew that stopping Montgomery was going to be a challenge. He came into Friday night’s contest leading the Jacksonville area in rushing yards. 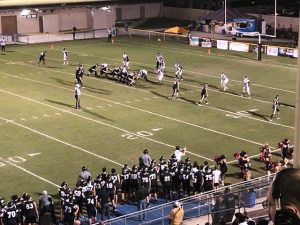 “They slowed down ours, and we didn’t slow down theirs,” said coach Whittemore. “We knew that was the tale of the tape, their junior against our junior (Quandarius Smith).

“And they stopped our junior, we didn’t stop theirs. That’s the story of the game.”

The Bobcats roared back with their own touchdown drive capped off by a Smith 2-yard touchdown run from the wildcat position. They entered the halftime break 10-7.

At halftime, coach Whittemore was pleased with his team’s performance and made no adjustments.

“I told them we had a good first half, let’s try to replicate what we did,” said coach Whittemore. “They didn’t really counter, they did the same thing.”

The Senators received the ball after halftime, and on their second play, they took it all the way for six. The play started as a handoff to Montgomery but then he pitched it to Demetrius Pettis on a reverse for a 60-yard touchdown to make the score 13-7 because the extra point was no good.

Fletcher capitalized on another scoring chance when the Bobcats turned it over on downs. Montgomery made the Bobcats pay on a safety blitz when he took it to the house on a 61-yard run, which made the score 20-7.

Buchholz answered again when they methodically drove down the field. Bobcats’ quarterback Jack Hevesy completed a 9-yard touchdown pass to Gavin Hill in the back of the end zone to make the score 20-17.

Until the fourth quarter, the Bobcats responded to every Senators touchdown with their own.

The Buchholz defense just couldn’t find a way to get a stop.

Montgomery scored for the third time when he ran a 6-yard run into the end zone. This gave the Senators a 10 point lead.

Fletcher’s star tailback found the end zone one more time to cap off his 317 yards and four touchdown performance.

The Senators added one more touchdown in garbage time to get to the final score of 41-17.

After their first district loss of the year, the Bobcats are in a dire situation if they hope to make the playoffs again.

“We have to win the next two district games just to stay alive, just for anything to be possible,” coach Whittemore said. “We will return to the office and see what we can do.”

The Bobcats will travel next week to take on another district-foe in Fleming Island.

Zachary Huber is a senior journalism student specializing in sports media at the University of Florida from Jacksonville, Florida. He works at The Alligator, covering gymnastics and volleyball while working at ESPN Gainesville. Follow him on Twitter @zacharyahuber.
@@zacharyahuber
Previous Newberry Panthers Win Seventh Straight
Next Florida captures first loss at LSU, 42-28