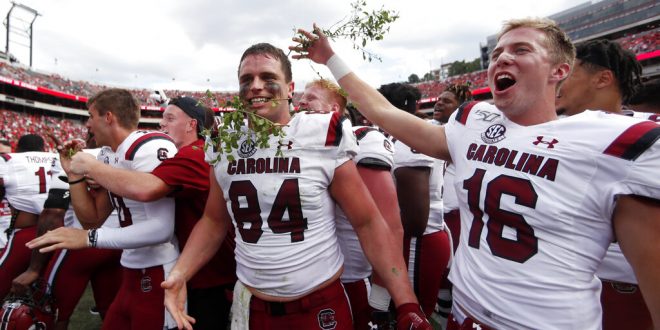 The South Carolina Gamecocks (3-3) are coming off of a massive upset against Georgia (5-1), who was No. 3 in the nation coming into Saturday.

This will be the Gamecock’s second-straight matchup against a top 10 team. However, Gamecocks head coach Will Muschamp and his players are prepared for the challenge.

Against LSU, Gators coach Dan Mullen deployed both Kyle Trask and Emory Jones at quarterback, which should be the case again this weekend.

Muschamp says his team respects the talent of both players and is ready to face both signal callers.

Trask and Jones have shared the field in the Gators past two games against Auburn (5-1) and LSU, both SEC opponents. This trend should continue against SEC East rival South Carolina.

Emory Jones was billed as the #Gators future at QB. Kyle Trask waited seven years for a start.

Somehow Dan Mullen has gotten them to co-exist in a productive two-QB system. Guess when you've got Chris Leak and Tim Tebow as an example it helps – https://t.co/2dxk5TNDWt pic.twitter.com/qcqIIrZuaE

Challenge for South Carolina on Defense

While South Carolina’s game plan against Florida won’t change much based on which quarterback is playing, that doesn’t mean the Gamecocks won’t be challenged on defense.

This is the 40th meeting between South Carolina and Florida. The series, which the Gators lead 27-9-3, dates back to 1911.

After this Saturday’s matchup, South Carolina will travel to Tennessee (2-4) to play the Volunteers on Oct. 26 at 4.

Florida will take a break after this weekend for their second of three bye weeks this season. The Gators’ next opponent is No. 10 Georgia on Nov. 2.