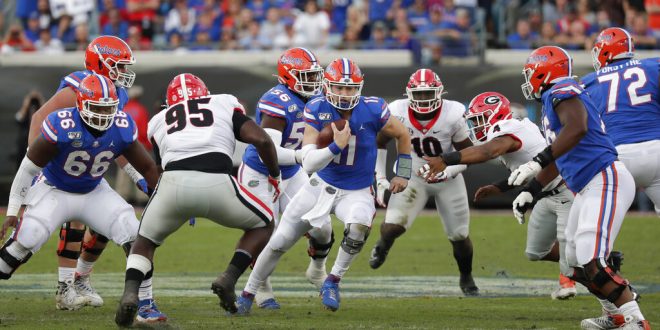 Following the Gators’ 24-17 loss against Georgia on Saturday, Mullen had plenty to say about the team going into the rest of the season.

If the Florida Gators had played as they did in the fourth quarter, the whole game, they would’ve won. The Gators were inconsistent on defense, and it wasn’t enough to keep Jake Fromm from holding his own in the pocket. Likewise, a botched first half led to a 3-and-out on the very first drive. Missed opportunities to capitalize early in the game bogged down the Gator offense. One that couldn’t seem to catch a foothold early on in the game, although trailing just by three.

For once, the elite Florida defense the masses were familiar with seemed to make an appearance. That is until a controversial call stood on the field. Fromm threw a low bullet on a third-and-6 to Lawrence Cager. Cager broke from C.J. Henderson’s coverage to snag the ball what seemed to be off the ground. Ruled a catch, the officials doubled down on the call setting the Bulldogs up for a touchdown three plays later.

“I just looked at the Jumbotron, so I saw what you saw,” Mullen told the media. “I asked the official, but they said that decision’s made in Birmingham. So they couldn’t even give me an explanation. That’s a question for them.”

To add insult to injury, the Gators will be down two key defensive players for their upcoming game against the Vanderbilt Commodores. Mullen announced that redshirt junior linebacker Jeremiah Moon is out with a foot injury and sophomore safety Amari Burney will be nursing a knee sprain.

“In talking to our trainers, here’s what we got: our guys that came into the game bumped up, with a bunch of bangs and bruises, we came out pretty healthy with those guys,” Mullen said. “Jeremiah Moon is going to be out for a little bit here with a foot injury and Amari Burney’s going to miss … he’s doubtful this week, but we’ll see. We should get him back before the end of the year.”

Vanderbilt and Looking Ahead

Despite the third-down woes that Florida felt, a 10-2 regular season is still a possibility. The upcoming games for Florida aren’t unwinnable, but they shouldn’t be taken lightly Florida faces Vandy, Mizzou and Florida State. That could be good enough for a New Year’s Six bowl.

Unfortunately for the Gators, there’s still uncertainty when it comes to a championship appearance. They would need to win the rest of their games and have Georgia get two losses when they play Missouri and Auburn.

The Florida Gators host the Vanderbilt Commodores on Saturday 11/9 at noon in the Swamp. Be sure to check back right here for all the action.