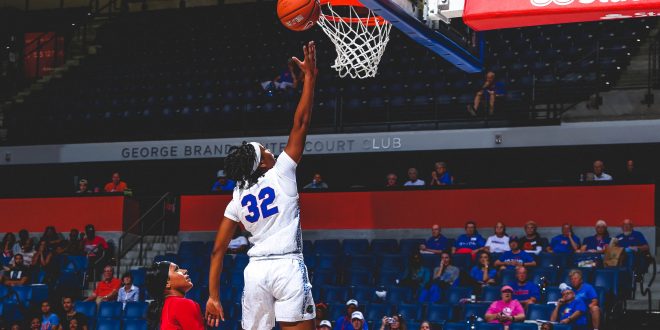 The Gators travel to face the Grambling State Tigers for the first time ever in both program histories. This will be the first game of their regular season and it will be held at the Frederick C. Hobdy Assembly Center. Tipoff is set for 7 p.m.

Redshirt senior forward Zada Williams was spotted in the starting five in the exhibition game last Wednesday and scored a total of 13 points. Williams started in a total of 13 games last season.

Another player on the spotlight was redshirt junior guard Kiki Smith, who rose to the occasion when Florida was struggling on the offense. She scored 20 points in total, 11 of those in the third quarter helping the Gators extend their lead.

Ariel Johnson also played a key role for the Gator offense. She scored 13 points with a total of 10 rebounds and five assists.

Before the exhibition game, it was announced redshirt junior guard Danielle Rainey was set to sit out this season. She suffered a knee injury during a team scrimmage.

The Gators had a rough season last year ending the year with a 8-23 record, 3-13 on their conference. They look to improve their record this year with a lot of new talent on the court. They will have to depend on this new talent after losing one of their star players Funda Nakkasogglu due to graduation.

On the other side, Grambling State finished with a 16-16 record, 12-6 in their conference. They lost prolific guard Shakyla Hill who broke a record after recording two quadruple-doubles. Something that has not been accomplished in 25 years.

Justice Coleman returns this season and is the leading scorer of the Tigers with a 6.4 average last season. They are also under the leadership of head coach Freddie Murray, who led them to a victory over rival Ole Miss in the 2016-17 NIT.

The Gators will have their home opener Sunday Nov. 10 against Longwood.

Camila is a senior at the University of Florida, who served as a beat writer for the women's basketball team from 2019 until the 2021 season. She was also a beat writer for the Gators football team during the 2020 season. Camila is also WUFT's news director as well as a sports reporter/anchor.
@CamilaMaffuz
Previous Game Preview: Gators Men’s Basketball Opens Season Against Ospreys
Next Dan Mullen On Georgia, Injuries and Growth