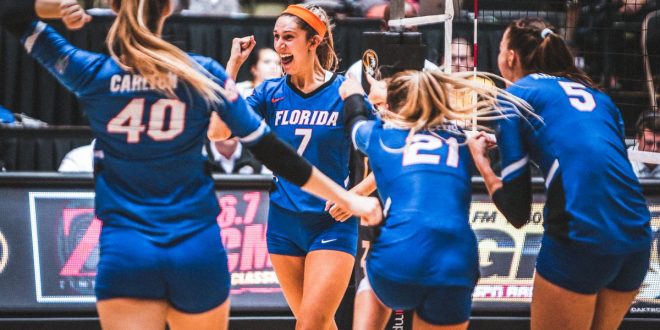 After three straight road games, the No. 11 Florida Gators volleyball returned to Exactech Arena for an SEC showdown against the LSU Tigers on Friday night.

Florida, currently holding the longest active win streak in the SEC, took a three-set victory over the Tigers.

After keeping the score within for the first half of the opening set, Florida slowly began to take the lead.

A kill from Holly Carlton shifted the momentum in favor of Florida as the Gators took the lead 11-9.

Carlton recorded four kills in the first set and ended the night with a total of 11. Furthermore, Carlton went on to record a .500 hitting percentage.

Florida would continue to further their lead despite four kills from Bannister in the first set.

The second set duplicated the close start in the first set. Midway through the second set the Gators began to pull away with the lead.

A kill from outside hitter Thayer Hall gave Florida a 10-7 lead. Hall recorded six kills in the second set and a total of 12 on the night.

LSU right side hitter Bannister added another six kills in the second set.

The Florida defense proved to be strong throughout the night. Libero Allie Gregory recorded 12 digs, including eight in the second set.

Florida would maintain their lead throughout the rest of the second set winning, 25-19.

In the third set, Florida jumped out to an early 4-1. Hammons led the attack for Florida in the final set.

Furthermore, Hammons recorded eight kills in the third set to give the Gators a 25-18 victory.

Florida outside hitter Paige Hammons on the Gators performance against LSU #FloridaVolleyball pic.twitter.com/mdHwN42raI

The Gators will continue conference play this weekend against the No. 17 Kentucky Wildcats. The last time the two teams met in Lexington the Wildcats walked away with a five-set victory.

Florida will host Kentucky in their second match-up of the season at 3 p.m. on Sunday.

You can listen to live coverage of the match on GatorVision or watch live on the SEC Network.