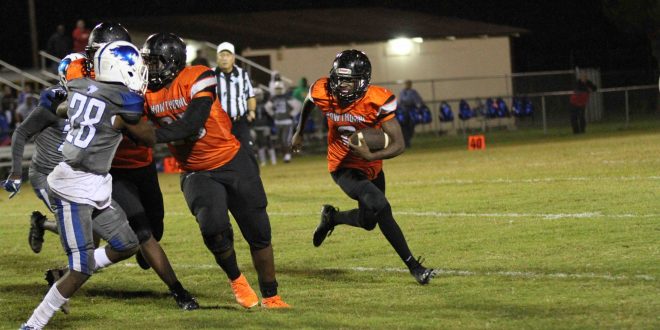 Key'Shaun Williams runs around his blocking linemen up the side of the field in round one of playoffs against Wildwood.

Two Hawthorne fumbles set the stage for a Pahokee playoff win. The Pahokee Blue Devils scored twice early on after a fumble by the Hornets in their own territory. Then another recovery in the red zone resulted in a scoring drive with 12 seconds left in the quarter. 14-0 Pahokee at the end of the first quarter.

Halfway into the second quarter, the Hornets finally get on the board. A pass from Hawthorne’s quarterback, Key’Shaun Williams found Jayquan Williams in the end zone, bringing the score to 14-7. “It was just one of those things where we started slow- it was rocky,” Head Coach for Hawthorne, Cornelius Ingram said. “We did a lot of good things tonight, but we did more bad things than normal. But it goes that way sometimes; the kids have to grow up. Our young guys have no choice but to grow up. Whether you do something good or bad, you have to grow up.”

With 1:22 left in the game, Jayquan Williams found the end zone once again, bringing Hawthorne into a two-touchdown difference game. Unfortunately for the Hornets though, this was not enough to catch them up to the Blue Devils. Round two of playoffs concluded with a 28-14 loss by Hawthorne while Pahokee moves on the play Chiefland at home next week. “Can’t take anything away from the defense, they played phenomenal. [We have to work on] execution for next week,” Head Coach for Pahokee, DJ Boldin said. “Execution in all the small things. That’s from the coaches to the players. To the offense, to the defense, to the special teams, to the play calling. Just, we’re chasing the championship and that wasn’t a championship-effort team.”

While both teams made errors throughout the game, the Hornets gave up twice as many turnovers as Pahokee. Convenient as they lost by exactly half the number of points as well. “At least three of those turnovers were just us putting the ball on the ground,” Ingram said. “And we can’t do that in a big game. They were unforced turnovers- not a lot of contact. And on the other ones, their guys just did a great job of stripping balls out or going up to make plays on interceptions.”

The Blue Devils’ defense placed enough pressure on Hawthorne’s offense that they had 6 possessional turnovers. This included the final Hornet’s drive of the game with 5 seconds remaining and in the red zone when Keyonvis Buie intercepted the ball to end the game.

“We’ve got a lot coming back,” Ingram promised.

Rylee is a third year Journalism major with a specialization in sports and media at the University of Florida College of Journalism and Communications.
Previous Women’s Basketball Hosts Samford for Third Game of the Season
Next Florida volleyball sweeps LSU in return to Gainesville