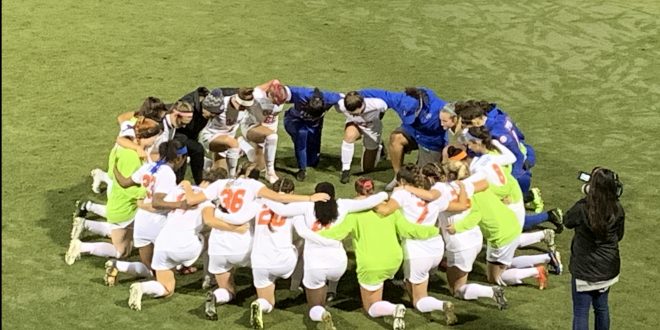 The Florida Gator soccer team’s season is over. They lost 4-2 to No. 17 USF in the round of 64 of the NCAA Tournament at Donald R. Dizney Stadium Friday night.

The Bulls got revenge for their 2-0 loss to the Gators earlier this season.

South Florida senior striker Evelyne Viens had a standout performance, scoring a hat trick over a 15-minute stretch of the game.

The game remained scoreless until the 43rd minute. While USF had a majority of the shots up to that point, Florida had several chances of their own. However, it was the guests that broke the deadlock.

Viens capitalized off of a heavy touch from Carina Baltrip-Reyes in the box. She collected the ball and drove it into the bottom-left corner, giving Susi Espinoza no chance in net.

The game opened up more in the second half of play. Viens extended the Bulls’ lead just seven minutes after the break with a slow roller with her left.

Three minutes after that, Viens bagged her hat-trick goal. Again, the senior capitalized on poor play at the back from Espinoza and the rest of the Gator defense.

Florida’s Deanne Rose pulled one back in the 62nd minute. The Gator press finally paid off with Rose picking the pocket of one of USF’s defenders. Then, she was off to the races.

The final two goals of the match came just 32 seconds apart and on set pieces. First was USF’s fourth and final goal in the 84th minute. Fanny Pelletier-Laroche put it away off of a corner kick. Then, Georgia Eaton-Collins did the same for the Gators.

USF edged UF in total shots 18-14. However, it was the hosts that had more shots on target (8-6). South Florida’s Sydney Martinez finished the game with six saves to Espinoza’s two.

“Congrats to USF. I thought they played a really good game. We wish them luck in the next round.” -Gators head coach Becky Burleigh

“I think we gave [Viens] a little bit too much space at times. Obviously, she doesn’t need very much time or space to get a shot off.” -Parker Roberts