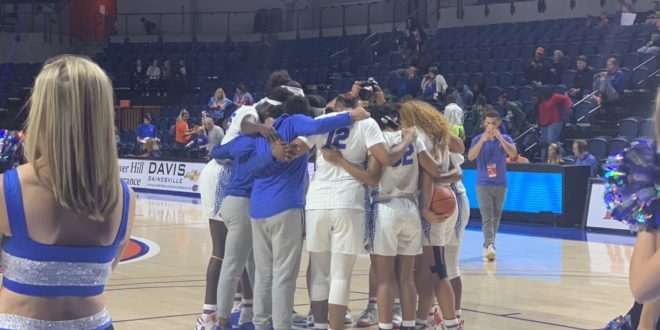 The Gators keep their undefeated season alife after a 84-48 victory over the Samford Bulldogs.

The team ended the game with four players scoring in double digits. Not only that, but every Gator was able to score in this game.

The Gators now have a 3-0 record, keeping their undefeated season. This has been the best record they’ve had at the beginning of a season under the coaching of head coach Cam Newbauer.

The Gators also tied the O’Dome record for made three pointers. Kiki Smith and Ariel Johnson also recorded a new career-high in scoring.

At the beginning of the season, the Gators were struggling with their first half execution. It wasn’t until the second half against Grambling State and the second quarter against Longwood that the Gators were able to get the lead.

However, that was not the case for this matchup. The Gators started with an early lead, scoring 13 points before Samford finally appeared on the board.

The Gators kept the lead throughout the whole game and were up by as many as 39 points in the third quarter.

Despite a great effort, Samford was only able to cut the lead to 28 points in the second half. The Gators then extended their lead once again and finished the game with a 36-point difference.

Many players from the incoming class have been shining through the whole season. But today it was freshman guard Lavender Briggs, who represented her class.

She led her team with 19 points and was just one rebound short of earning her second double-double. Briggs was dominating the three-points shots, ending the game 5-6 on attempts.

But as always the veterans also shine on the court. Redshirt junior guard Kiki Smith trailed Briggs for most points, ending with 18.

Just like Briggs, Smith was dominant with her three-pointers, only missing one and ending 3-4 from beyond the arc. She also led her team on assists, ending the game with four.

Sophomore guard Ariel Johnson was also a key player in today’s victory. She ended the game with 15 points and five rebounds. She was dominant in both three-pointers and field goals as she finished 3-5 for three-pointers and 6-10 on the paint.

Sophomore guard Kristina Moore also left her mark. She started the game with a three-pointer in the first quarter that fired up her team and led them to score 28 points in that quarter.

Next up, the Gators will host Presbyterian on Monday at 10:30 a.m.

Camila is a senior at the University of Florida, who served as a beat writer for the women's basketball team from 2019 until the 2021 season. She was also a beat writer for the Gators football team during the 2020 season. Camila is also WUFT's news director as well as a sports reporter/anchor.
@CamilaMaffuz
Previous Oak Hall comeback effort falls short against Foundation Academy
Next Gators win kick-fest in Missouri 23-6