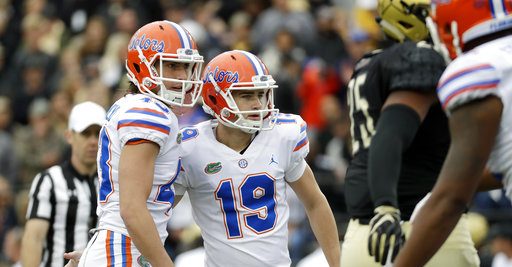 In football, there are offensive clinics, there are scrummy defensive battles and then there are… kick-fests.

That was the Florida-Missouri game in a nutshell on Saturday afternoon.

By the end, Florida had snapped their two-game skid to the Tigers 23-6 and handed Missouri their first loss at home in the 2019 season.

In an opening half that saw a total of nine points, field goals were the only means of scoring.

However, it was the punters who saw the field more often than either coach would have liked.

Tommy Townsend (UF) and Tucker McCann (MU), both punters, combined for a total of 10 punts in the opening half of the game. The two combined for 460 yards off of punts in what ended up being a who-can-flip-the-field-best war.

For what it’s worth, Florida’s Tommy Townsend averaged 45.8 yards on a total of eight punts — including a 71-yard boot to tie his personal best.

Have a day, Van Jefferson!

Stepping away from the season-long favorite, Kyle Pitts, Kyle Trask found a new hot receiver in the Gators’ win over Missouri.

His name is Van Jefferson.

Trask was picking favorites early in the game as Jefferson had four passes thrown his way on the opening drive. Coming down with three of those receptions, Jefferson tallied 50 yards early to set up a 47-yard field goal for Evan McPherson.

Perhaps the prettiest reception for Jefferson came late in the third quarter. Jefferson climbed the ladder and showed off his jumping ability as he snatched a high pass from Kyle Trask to convert a 3rd and 4.

Big boy drop back for Trask – connects with Van Jefferson for the Gators second 3rd down conversion of the game pic.twitter.com/TyPkK0YQMJ

With eight targets on the game, Jefferson hauled in six receptions for the Gators, totaling 86 yards.

Eclipsing the plain of the end zone didn’t prove easy for either team. However, the Gators were the only team to do it in Missouri on Saturday.

Early in the third quarter, Kyle Trask found a streaking Josh Hammond for a 34-yard touchdown.

Kyle Trask puts in on the back shoulder for Josh Hammond as the Gators take a 13-3 lead! pic.twitter.com/etySjConif

Florida’s second touchdown, an insurance score, if you will, came late in the third quarter.

Lamical Perine lined up out wide and ran a seam down the left sideline. In a nicely placed ball, Perine snatched the ball in the back corner of the end zone while getting a single foot down for a 15-yard touchdown to make it 20-6 heading into the fourth.

Defense does their job

With neither team running the ball well, the Gator defense held a Kelly Bryant led Missouri offense to just 52 yards on the ground. Of those 52 yards, Kelly Bryant himself contributed to 19 of them.

The slippery quarterback eluded Florida defenders pretty consistently throughout the game. However, Jonathan Greenard was able to drop the Tiger quarterback to the ground on two occasions.

Greenard, who has proven to be the God-sent graduate-transfer for Grantham’s defense, had himself quite the outing. With six total tackles from Greenard, five saw Missouri lose yardage.

Marco Wilson also posted an impressive day that got off to a quick start.

On Missouri’s opening drive, Bryant threw a quick screen to Jalen Knox. Wilson read the play like he wrote it himself and dropped Knox for a loss of two yards.

Wilson capped off his performance against Missouri with an interception late in the fourth quarter to seal the win.

Marco Wilson seals the win in Columbia with a pick pic.twitter.com/Lp5aibS4qW

For the Florida football team and Gator fans everywhere, their eyes are likely glued to the Georgia-Auburn game and rooting hard for Gus Malzahn and the Tigers.

Dan Mullen after the game

The Gators need the Bulldogs to lose their next two SEC games to slide into the SEC Championship. Nonetheless, Mullen and the Gators understand that there is still an NY6 opportunity at stake.

They’ll take a week off before rivalry week against a Willie Taggart-less Florida State team.

Ainslie is a journalism major at the University of Florida where she specializes in Sports Media. Her main passion is college football as it was a huge part of her childhood. Ainslie serves as a current correspondent for the Ocala Star-Banner, a newspaper for the Ocala, Florida area. She currently covers Marion County high school sports.
Previous Gator Women’s Basketball Remains Undefeated
Next Game Preview: Gators face first road test in Connecticut