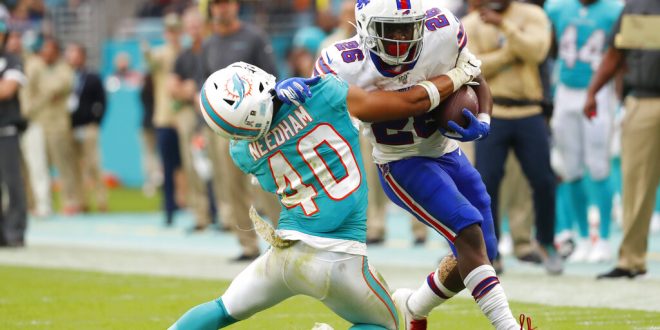 Dolphin fans’ dreams were dashed — initially with a win; now, a loss.

The Miami Dolphin’s two consecutive wins had invigorated a fan base convinced their team was “Tanking for Tua.” But the Buffalo Bills laid any hopes of a late-season turnaround to rest on the field at Hard Rock Stadium. The Bills walked away with a 37-20 win on Sunday and the Dolphins’ short-lived pride in the AFC East division match up.

FINAL: @JoshAllenQB throws three TDs to lead the @BuffaloBills to their 7th win of the season! #BUFvsMIA pic.twitter.com/hJkOY4edBN

Buffalo lost to the Browns 19-16 last week, but ran its way to a win on Sunday. The Bills’ overall play, lead by quarterback Josh Allen, was dominant enough to overcome Miami’s special teams play.

Miami’s Jakeem Grant scored one of his two touchdowns on a 101-yard kickoff return in the second quarter. The return gave Grant his fourth special teams touchdown, making him the franchise leader in that category.

But it wasn’t enough. And neither was Jason Sanders recovery of his own surprise onside kick in the same quarter. Miami quarterback Ryan Fitzpatrick threw a deep pass to Allen Hurns, who caught the ball but fumbled it right back to the Bills.

Allen credits his offensive line for their part in the win.

Phins fans had bought into “Tanking for Tua.” Losing for the future was better than scraping by, just missing the playoffs for another year, they thought. Sure, it was ugly to watch, but the payoff  in the form of the fresh quarterback out of Alabama would be worth it. Then they beat the Jets.

Fans groaned as they saw the top position in the draft — a position their team had fought so hard to earn through terrible losses — slip away. A single, relatively meaningless win against the New York Jets made fans think the Dolphins couldn’t even lose right. But then they won again.

Miami pulled off back-to-back wins after beating the Indianapolis Colts (5-3 at the time) 16-12. The win invigorated a fan base that had become accustomed to losing. Then, the Bills reminded them what those seven other losses had felt like.

If the season were to end today, the Dolphins would draft fourth. But, with Tua Tagovialoa out for the season after dislocating his right hip on Saturday, that may still be high enough. Which poses the question, “Does Miami still draft the now twice-injured star to be the franchise quarterback of the future?”