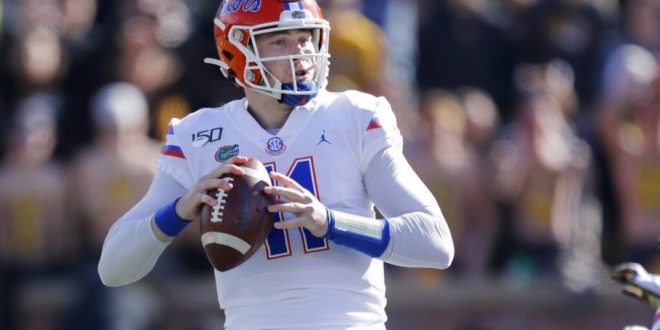 Florida quarterback Kyle Trask drops back to pass during the first half of an NCAA college football game against Missouri, Saturday, Nov. 16, 2019, in Columbia, Mo. (AP Photo/Jeff Roberson)

The Florida Gators enter their third bye week of the season following their 23-6 victory over the Missouri Tigers on Saturday. As the Gators regroup, their final regular season game against Florida State looms over the team with anticipation.

Dan Mullen and the team are in great position to head to a New Year’s 6 Bowl game this year. After defeating Mizzou, their record reached 9-2, with a 10-win season not out of reach. The Gators will undoubtedly be highly favored against the 6-5 Seminoles.

With the season coming to a close, as well as the decade, a reflection on the team offers some hope for the future. Throughout the 2010’s the Gator’s only made one New Year’s 6 game, last year’s Peach Bowl against Michigan. Back-to-back NY6 appearances would be a good indicator about where the team is going under the current coaching staff.

A season full of shortcomings, disappointment and ambition is motivation enough for any team in a rivalry to beat out their arch-nemesis. Florida vs. Florida State is often a slug-fest between two powerhouse sunshine state teams. The Florida Gator’s players are looking forward for their chance to take on their rival and securing good postseason position

For some, like SEC Defensive Player of the Week, Jonathan Greenard, playing their biggest rival at home means something more. It’s his last home game as a Gator and the defensive lineman is expecting to leave everything on the field.

Florida hasn’t had a coach start 2-0 against the Seminoles since Urban Meyer, putting Dan Mullen in a position of potential Gator greatness. The Gators host the Seminoles at Ben Hill Griffin Stadium following their bye week on Saturday evening 11/30, at 7:30.