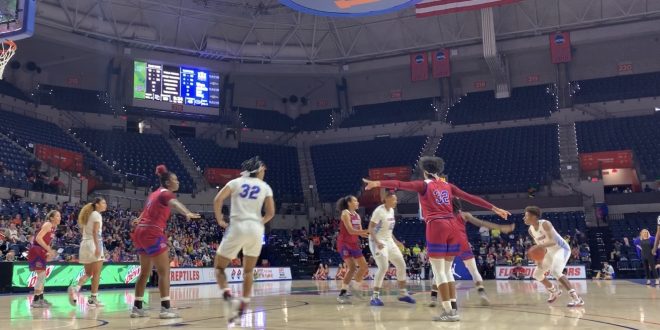 The Gators Women’s Basketball team remains undefeated at 4-0 after a 60-46 victory over the Presbyterian Blue Hose.

After showing improvement on their first-half performance this season, the Gators showed signs of struggle in the first quarter against the Blue Hose. In this quarter, Presbyterian was able to tie the game before the Gators regained their lead a few seconds before the quarter ended.

The Blue Hose fought hard, keeping the Gators’ lead within single-digits for most of the game. It was a valiant effort but it was still not enough to get their first victory against an SEC team.

Next up, the Gators will host Indiana Hoosiers on Friday at 6 p.m. at Exactech Arena.

The game started with a three-pointer from freshman guard Lavender Briggs. This was followed by field goals from Zada Williams and Kristina Moore.

But it didn’t take long for the Blue Hose to catch up. Presbyterian was quick to score six points, cutting the Gators’ lead to only one point.

The Gators tried to extend their lead but the Blue Hose fought back and eventually tied the game at 12. A two-pointer from the paint by Zada Williams helped the Gators end the first quarter on the lead. 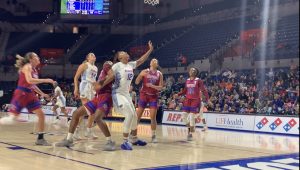 The Gators were able to finally extend their lead in the second quarter. They were able to claim a 12-point lead.

However, Presbyterian’s defense was limiting the Gators to extend their lead. Players like Jade Compton, who scored 20 points, prevented the Gators from advancing.

The third quarter was also kept close. The Blue Hose outscored the Gators in this quarter 17-15. The Gators headed to the final quarter holding a seven-point lead.

After struggling to score for much of the game, the Gators got hot in the fourth quarter. Zada Williams was the first one to score in this quarter with a two-pointer from the paint. Nina Rickard later added two more to the lead.

The final quarter is off to a strong start for the Gators with shot by @Zada_Williams12, making the score 47-38. @ESPNGainesville pic.twitter.com/gXas3LVSnK

The Gators recovered their double-digit lead, leading the Blue Hose 56-43 with a little under 2 minutes left in the quarter. The Gators were able to outscore the Blue Hose 15-8 in the fourth.

Head Coach Cam Newbauer recognized that the Blue Hose were strong defensively and that the Gators had to adapt as the game went.

Four Gators reached double-digit scoring on the day. Both Lavender Briggs and Kiki Smith led the team with 11 points apiece. Trailing behind them was Zada Williams and Ariel Johnson with 10 apiece.

Johnson got to double-figures before the first half was even over. Not only that, but she also recorded two career-highs. She had three steals and four assists. One of these assists led to a three-pointer by Brylee Bartram that helped the Gators extend their lead.

An assist from Ariel Johnson leads Brylee Bartram to a three-pointer. After this a buzzer-beater three-pointer from Presbyterian College ends the first half. @ESPNGainesville pic.twitter.com/ndPxLJIzoP

Williams played a clean game, only getting one foul. She was also one rebound short of achieving her first double-double of the season. This is also the third game of the season that Williams has scored at least 10 points.

Camila is a senior at the University of Florida, who served as a beat writer for the women's basketball team from 2019 until the 2021 season. She was also a beat writer for the Gators football team during the 2020 season. Camila is also WUFT's news director as well as a sports reporter/anchor.
@CamilaMaffuz
Previous Saints Take Commanding Lead in NFC South with Victory Over Bucs
Next Gators Enter Bye Week; Look Ahead to Florida State and Possible Bowl Game 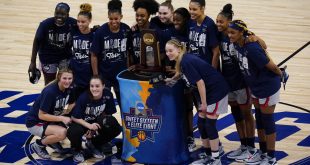