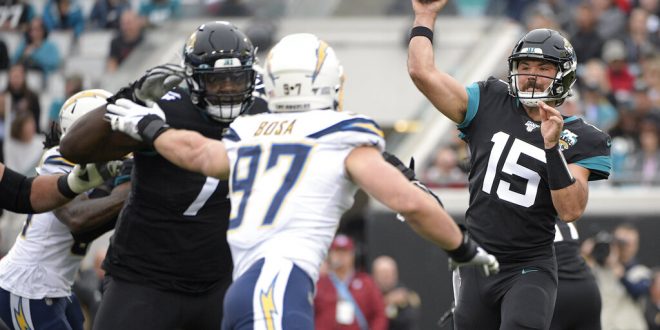 In Jacksonville’s opening drive, Minshew marched the Jaguars down the field before being stopped in the red zone by the Chargers defense.  Jaguars kicker Josh Lambo put Jacksonville on the board, 3-0, with a 26-yard field goal.

On the opening drive, running back Leonard Fournette reached 1,000 rushing yards on the season.

Los Angeles quickly responded with a three-play touchdown drive capped off by a one yard rushing touchdown from Melvin Gordon.  The Chargers one minute and 37 second scoring drive put them up 7-3 over the Jaguars.

With under two minutes left in the second quarter, Los Angeles quarterback Philip Rivers put the Charges up 21-3 with a 30-yard touchdown pass to tight end Hunter Henry.

The Chargers ended the first half with a 40-yard field goal from kicker Michael Badgley to put Los Angeles up 24-3 heading into the half.  In the opening drive of the second half, the Chargers jumped out to a 31-3 lead as running back Austin Ekeler went 84-yards off a pass from Rivers.

Rivers finished the night 16 for 22 with three touchdowns.

A fake punt from Jaguars punter Logan Cooke on a fourth and three gave the Jaguars an offensive spark and a nine-yard pass from Cooke to wide receiver Michael Walker kept the Jaguars drive alive.

On the next drive, the Chargers responded with a touchdown of their own putting them up 38-10.  A 44-yard pass from Rivers to tight end Mike Williams put the Chargers in the end zone for the fifth time.

Chargers second string quarterback Tyrod Taylor came out in the fourth quarter in place of Rivers and his 14-yard pass to Virgil Green gave the Chargers a 45-10 lead.

Jacksonville defensive end Calais Campbell comments on his belief in his team despite its record.

The Jaguars return to the field Sunday to face the Oakland Raiders (6-7). Kickoff for the Jaguars road game is set for 4:05 p.m.

Previous Did the College Football Playoff Committee Get it Right?
Next Gators and Gophers Rematch in Volleyball Regional Semifinal