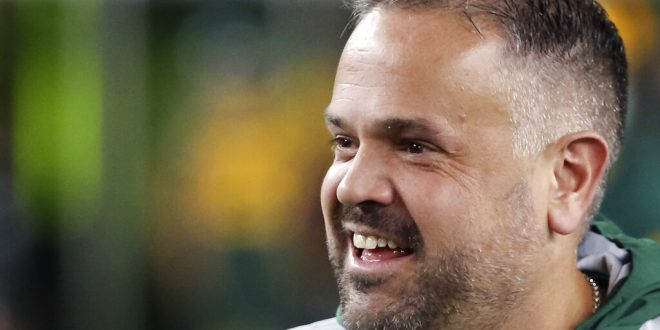 FILE - In this Nov. 16, 2019, file photo, Baylor head coach Matt Rhule stands on the field prior to an NCAA college football game against Oklahoma in Waco, Texas. A person familiar with the situation says the Carolina Panthers are completing a contract to hire Baylor's Matt Rhule as their coach. The person spoke to The Associated Press on Tuesday, Jan. 7, 2020, on condition of anonymity because the deal is not done. The Panthers have not spoken publicly about the coaching search. (AP Photo/Ray Carlin, File)

Both the New York Giants and the Carolina Panthers needed some sort of change in their respective programs. Neither team had a winning season, finishing nearly last in their divisions. So both programs started at the top: by changing the coaching staff. In New York, the Giants are finalizing a deal to hire Joe Judge as head coach. Judge was the wide receivers coach for the Patriots. Meanwhile, the Panthers hired former Baylor head coach Matt Rhule as the coach in Carolina.

Who is Joe Judge?

For Giants fans, the past season was a major disappointment. They recorded just four wins. Since the beginning of the 2017 season, the Giants are 12-36, an NFL worst. Judge, at 38, was the youngest candidate in the running for the position. Though he’s not as well known, he has been mentored by legends Nick Saban and Bill Belichick.  He’s worked as a special teams coordinator and was the wide receivers coach for the Patriots – but this will be his first head coaching job. Belichick had high praise for Judge back in July.

Bill Belichick's comments on Joe Judge from back in July read like a letter of recommendation. Said Judge "could probably coach any position on the field." pic.twitter.com/3PhBKoTv3B

He is going to be the 19th coach in franchise history, and will have his work cut out for him in the off season. There’s definitely talent in the program, with players like Saquon Barkley and Darius Slayton. Judge will have a young, fresh start in this off season to try to turn around this New York Giants squad.

One of the coaches in the running for the Giants head coaching job was Matt Rhule. He was supposed to interview today, but never went up to New York after accepting the deal with the Panthers. According to ESPN’s Adam Schefter, the deal is seven years and Rhule could be getting up to $70 million. But there was another cost:

One other cost for Carolina hiring Matt Rhule: Panthers paid Baylor a $6 million buyout to hire their new head coach, per league sources.

Rhule had an incredible impact on the Baylor football program. They went 11-3 this past season, just two years after going 1-11. They also made it to the Big 12 title game. Although they lost in this year’s Sugar Bowl, Baylor fans have to be pleased with how quickly he turned the program around. He did that at Temple, too.

Carolina fans hope he’ll be able to turn around their program, who tallied five wins this year. He has talent in Christian McCaffrey and DJ Moore to work with. But he’s only spent one year coaching in the NFL as an offensive line assistant. The transition from the college game to the pro could take some time for Rhule and the Panthers.

It will be interesting to see how both of these coaches, with very different backgrounds, handle their first head coaching jobs in the NFL, and what impact each will have on their respective teams.