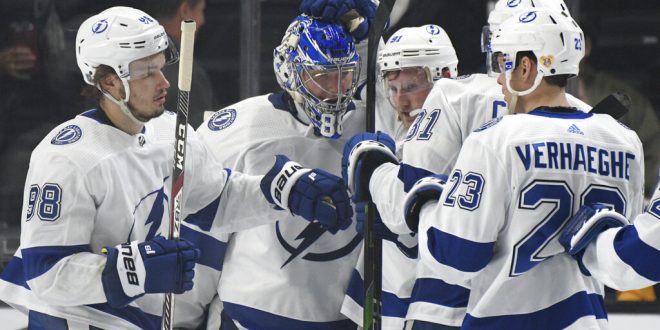 Lightning Win Out West Against Kings

The Tampa Bay Lightning shook off the rust last night from their ten-day All-Star break. After Monday’s tough overtime loss to the Dallas Stars, the Lightning went into Los Angeles and picked up the win against the Kings 4-2. Sure, the Kings are in the cellar, but beating a team in the cellar is a must. The game against the Kings was a good way for the Bolts to warm back up before the schedule beefs up in February.

Albeit, the game did not start off as planned. After seven minutes of pure defense, Tyler Toffoli scored his 13th goal of the season off a backhanded power-play goal to give the Kings a 1-0 lead early. The outlook for the Bolts didn’t seem much better as the game rolled into the second period. Alex Iafallo fires a shot from the far side of the left circle past Lightning goalie Andrei Vasilevskiy to put the Kings up by two. The Kings kept the pressure on for the next few minutes, but Vasy stayed sharp and never let another puck past him.

Just 5:48 into the second period, Ondrej Palat took the puck across the ice and made a last-second pass to his right to Tyler Johnson, leaving King’s goalie Jonathan Quick‘s left side wide open. Johnson snapped the puck to the back of the net, putting the Lightning on the board to make it 2-1. The Bolts got a power play and unloaded shot after shot on Quick. For over a minute and a half, the Kings blocked three shots by Steven Stamkos to keep the lead. Just after the power play expired, Stamkos’ fourth shot finally broke through the defense to tie the game 2-2. Stamkos picked up goal number 21 on the season.

The Sound of Thunder

The third period featured nothing but pure dominance by the Lightning. Erik Cernak flips a goal through a crowd over the head of Quick to give the Bolts a lead they’d never relinquish. Later in the third, Johnson makes a lateral pass to his right back to Stamkos, who scores with ease to momentarily make it 4-2. However, after review, it revealed that Johnson’s pass put the Bolts offsides. No goal.

Stamkos would eventually get that second as he picked up an empty netter with less than one second left in the game to win the game 4-2.

Despite the early struggle, Vasilevskiy had a .941 save percentage in the game. Vasy has been unstoppable since a slow start to the season, putting up a 12-0-2 record since Dec. 27, according to the NHL Public Relation’s twitter page. He is two games away from tying the point-streak record by lightning goalie set by Nikolai Khabibulin back in February 2003 (12-0-4 record).

The Lightning improve to 30-15-5 on the season and now sit just five points behind the first-place Boston Bruins. The Bolts continue their trip around the west coast when they play the Anaheim Ducks on Jan. 31.

Harrison is a sports coordinator at ESPN 98.1 FM/850 AM WRUF. He served as a beat writer for Florida Gators football for the 2019 and 2020 seasons. He also contributes to WRUF's Gainesville Sports Center segments and makes appearances on the Clash on Harp on Sports. Harrison has been a content writer for WRUF since January 2019 as well.
@HarrisonSmaj
Previous Alabama Crimson Tide roll into Louisiana looking to halt streaking Tigers
Next No. 13 Kentucky Rallies to Beat Vanderbilt