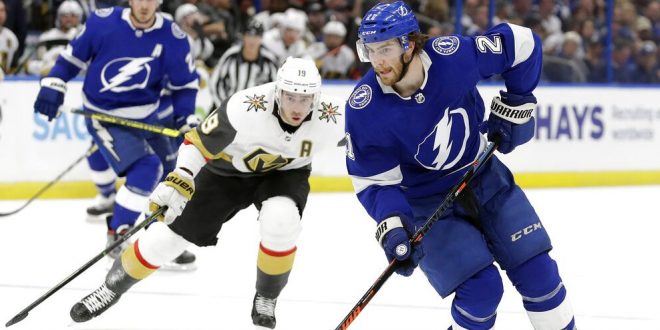 The Tampa Bay Lightning extended their winning streak to four games after a win against the Vegas Golden Nights. This was also their seventh straight at home, the second-longest active streak in the league.

Despite a tough performance from the Golden Nights, Tampa Bay was able to hold them off in their first home game since Jan. 14. With that win, the Lightning move to 33-15-5 on the season and 9-0 on the season against Pacific Division opponents. Tampa Bay remains steady at second in the Atlantic Division.

In the third period, it seemed that the Golden Nights would threaten the Lightning’s 22-0-4 record when leading after two periods. Vegas tied the game up at 2-2, just minutes into the third period. Tampa Bay showed their resiliency though and pushed through for the win.

Steven Stamkos and Andrei Vasilevskiy were the big stars for the Lightning on Tuesday night. Stamkos tipped in the game winning goal during the third period. This goal was his 24th of the season and extended his scoring streak to seven games.

Vasilevskiy stopped 27 out of 29 shots to earn his league-leading 27th victory on the year. This win also extended his streak to 16 games without a regulation loss, which matches the franchise record set by Nikolai Khabibulin in 2002-03.

There was a special team member in attendance at the game on Tuesday. The Make-A-Wish Foundation of America introduced the team to Connor Perkins, 12, who has cystic fibrosis and happens to be a big Tampa Bay Lightning fan.

Perkins signed a one-day contract with the team and got to skate with the team, pass with Stamkos and score a goal on Vasilevskiy. He also got to read the starting lineup to the team in the locker room before the game.

The Tampa Bay Lightning stay at home to take on the Pittsburgh Penguins tomorrow. The Penguins are coming in at 33-14-5 on the season and second in the Metropolitan Division. Start time for tomorrow is set for 7 p.m.

Previous South Carolina looks to add to win streak with an SEC matchup against Ole Miss
Next Preview: Gators men’s basketball face off against Georgia