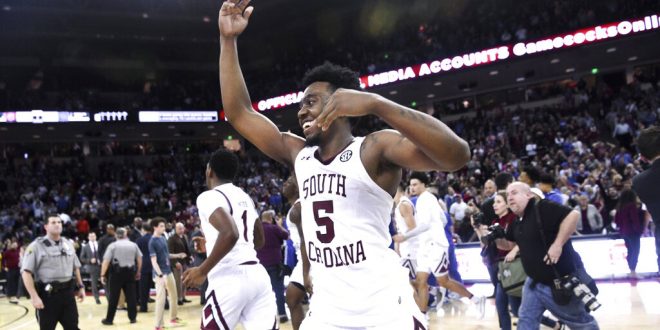 The South Carolina Gamecocks are in Ole Miss to take on the Rebels on Wednesday night. The Gamecocks may be playing at a high level right now, but they can’t underestimate the Rebels.

South Carolina on a win streak

Any time there is a rivalry game, you can throw the record out the door. With that being said, the Gamecocks are going into Ole Miss with a lot confidence as they ride a three-game win streak. Their impressive play has them tied for third in the SEC with 5-3 record.

Head coach Frank Martin has his team playing at a high level and that will need to continue against Ole Miss. A big reason why the Gamecocks are succeeding is because of Maik Kotsar. The 6’11 senior forward is coming off his best game of the season. Against Missouri, Kotsar put up 21 points and 11 rebounds. He used his 270 pound frame to his advantage in the paint and will need to continue his strong play. Coach Martin will need his team to keep up this pace if they are going go on a season-high four game win streak.

Ole Miss has a chance to make a statement

Despite their 1-7 conference record, the Rebels should not be taken lightly. Thanks to players like Devontae Shuler, who has put up back-to-back 20-point games, Ole Miss remains competitive even in their losses.

Head coach Kermit Davis has no reason to lose faith in his team, especially based on the last two games. The Rebels gave No. 17 Auburn a real fight but ultimately fell short 83-82. After that, they played No. 22 LSU and kept it close before losing 73-63.

The Gamecocks should not march into Ole Miss thinking that the game is a lock given the Rebel’s past matches. While the Rebels will likely remain at the bottom of the SEC standings, the Gamecocks are trying to keep pace with the top conference schools.

Neither team may light up the score board, but Coaches Martin and Davis will have their teams ready for this important conference showdown.