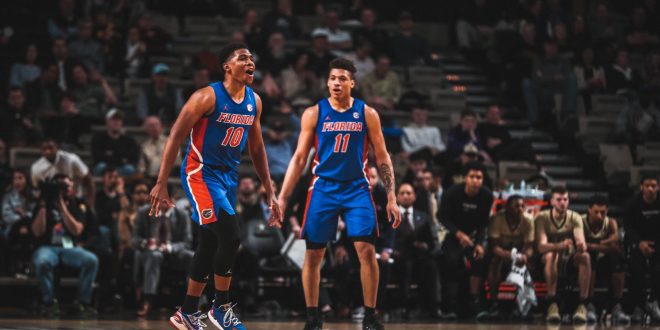 Florida bounced back from losing three straight games with a 61-55 win over Vanderbilt where they led for over thirty minutes. The Gators come in at 13-8 and tied at 4th in the SEC at 5-3.

Similarly, Georgia snapped their four-game losing streak with a win over Texas A&M, 63-48. The Bulldogs sit at 12-9 and 2-6 in SEC games.

Georgia’s Anthony Edwards carried the load for the Bulldogs against Texas A&M, scoring 29 points and grabbing 15 rebounds. The Bulldogs were in a very similar situation as the Gators, looking to get out of a losing streak against SEC competition.

Edwards leads the Bulldogs in scoring, averaging 19.3 points and 5.2 rebounds per game. According to ESPN, Edwards is also the second-best prospect for the 2020 NBA Draft behind LaMelo Ball and the best shooting guard in the 2020 class.

According to Florida head coach Mike White, Edwards is one of the best players in the country this year.

White says that guarding Edwards is a tough challenge. According to White, his versatility makes him hard to game plan for.

For Florida, Keyontae Johnson emerged as one of the team’s premier scoring threats against Vanderbilt. Johnson scored 20 points, grabbed seven rebounds, and nabbed 2 steals in a performance that Coach White calls one of the best of his Gator career.

Conversely, the Gators will rely on his defense. Johnson will more than likely find himself matched up against Anthony Edwards on Wednesday, and his similar frame may put him in a position to find success defensively.

According to Johnson, he’s up to the task.

The key for the Gators against Georgia simply comes down to their ability to contain Anthony Edwards. Looking at the just the team on paper makes the Bulldogs seem less daunting. However, in reality, Georgia is a team that can steamroll if their opponents do not game plan to shut down their key star.

Coach White says that it is going to take a group effort defensively to contain Edwards. Look for players like Scottie Lewis, Andrew Nembhard, and Keyontae Johnson to switch on Edwards throughout the game.

Steven Walker is a beat writer for ESPN Gainesville and is currently studying Journalism & Sports Media at the University of Florida.
@swalker_7
Previous Lightning extend win streak to four
Next MSU’s Mark Dantonio stepping down after NCAA lawsuit