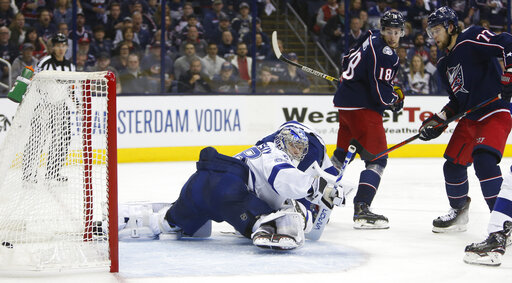 Last night, the Tampa Bay Lightning faced off against the Columbus Blue Jackets for the first time since the first round of the 2019 Stanley Cup Playoffs. The Bolts won in OT 2-1.

Tampa Bay showed their satisfaction for the win on twitter.

It should feel good. It’s a nice win. The Bolts won their seventh game in a row and are just three points behind the Boston Bruins for first place. For the regular season, it’s a good win. For 2020, it’s an important win. However, when it comes to redemption for being swept in the first round of the playoffs, it’s nothing.

The Bolts dominate the Blue Jackets in the regular season. Last year, the Bolts won all three games and outscored Columbus 17-3. Come playoff time, it translated to Columbus winning their first playoff series in franchise history. Tampa Bay became the first President’s Trophy winner to be swept in the first round. Blame the curse if it provides a peace of mind, but it can’t be redeemed by a typical regular-season win.

The intent here is not to take away from this win. The idea here is a reality check that there’s still a ways to go toward redemption. Don’t worry, it’s very possible.

The Road to Redemption

They’re well on their way. After the first half of the season made last year look like a fluke, lightning struck.  They’re coming after the opponent ready to dominate.  Since they walloped the Florida Panthers to win 6-1 on Dec. 23, they’ve lost twice in 50 days.

Showing last year’s regular season was not an accident: That’s step one. They’ve gone from being on pace for about 92 points to 112. Still a bit away from last year’s 128-point season, but it would have won them the President’s Trophy then too.

Making the playoffs is step two, which has a 99.8 percent chance of happening according to Hockey Reference. This puts them in line for step three: get out of the first round and go deep. Maybe even win the Stanley Cup. They currently have the third-best odds.

Since their current run of success began back in 2014, the Lightning have been called underachievers. The Stanley Cup Finals appearance was a long time ago already.

This year, the Bolts have a chip on their shoulders. With the dropped expectations and an embarrassment hanging over their heads, they don’t expect to win, they are determined to win. That change in mindset to more what they had in 2015 is what could make the difference between last year and Steven Stamkos finally getting to raise the Cup over his head in June. Then, it’ll all be redeemed.

The Bolts continue their march when they play the Pittsburgh Penguins on Feb. 11 at 7 p.m.

Harrison is a sports coordinator at ESPN 98.1 FM/850 AM WRUF. He served as a beat writer for Florida Gators football for the 2019 and 2020 seasons. He also contributes to WRUF's Gainesville Sports Center segments and makes appearances on the Clash on Harp on Sports. Harrison has been a content writer for WRUF since January 2019 as well.
@HarrisonSmaj
Previous The Toronto Raptors’ 15 Game Winning Streak is the Longest Ever by a Professional Canadian Sports Team
Next Seminoles Basketball Falls to Duke

The Panthers went to Tampa Bay yesterday with a vengeance, more than likely to seek …