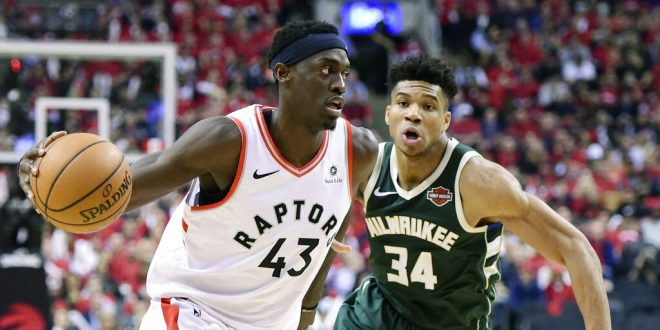 After a one-point home loss nearly a month ago, the Toronto Raptors haven’t lost a game since.  Toronto’s 137-126 win Monday night against the Minnesota Timberwolves extends the winning streak to 15.

Unfortunately for the Raptors, its 40-14 record is not good enough to be leading the Eastern Conference.  The Raptors currently sit 6.5 games back of the conference-leading Milwaukee Bucks.  Milwaukee has also been hot lately, winning nine of its last 10 games.

Despite being one of the most dominant home teams in the NBA, the Raptors have won eight of its last 15 games on the road.  Only the Bucks and Lakers currently have a better away record than the Raptors.  This statistic is certainly a confidence-booster for the playoffs where Toronto may need a road victory in a tough playoff atmosphere such as Boston, Miami, or Philadelphia.

During its winning streak, the Raptors have leaned heavily on its offensive production.  Toronto has averaged 121.2 points per game over the recent stretch.  Pascal Siakam, who leads the Raptors with 23.7 points per game, has been on fire as of late.  Siakam scored 34 points and shot 6-8 from beyond the arc in last night’s win over Minnesota.  Additionally, Toronto’s formidable back-court has been tremendous during its recent success.  Starting guards, Kyle Lowry and Fred VanVleet, combine for nearly 40 points and 15 assists per game.

Toronto’s depth has proven itself over the past month as several key players have been forced to miss games due to injury or illness.  Neither Marc Gasol nor Norman Powell has played in a game since January.  Gasol has been a strong presence in the paint and Powell has been extremely productive off the bench this season.  The two players combine for 56 minutes and 23.1 points per game, but Toronto’s bench has successfully filled the void.

When asked about the production of the players who are healthy, Raptors head coach Nick Nurse said: “they [go] out there and they take it to you, from Kyle [Lowry] to Fred [VanVleet] to Pascal [Siakam] to Rondae [Hollis-Jefferson] to OG [Anunoby].”

Nurse went on to mention how he thinks the team is “getting everybody’s A+ game.”

The Raptors enter tomorrow’s game with several injured players.  Norman Powell remains out, while Marc Gasol and Serge Ibaka are both listed as game-time decisions.

The Raptors will look to extend its winning streak to 16 games as they travel to Brooklyn for tomorrow’s matchup with the 24-28 Brooklyn Nets, whom Toronto defeated by one point at home last Saturday.  The Nets currently hold the 7 seed in the Eastern Conference and sit 15 games behind the division-leading Toronto Raptors.  In Saturday’s contest, the Raptors shot 40 percent from three and Fred VanVleet led the team with 29 points.  Despite Brooklyn’s loss, starting shooting guard Caris LaVert scored a season-high 37 points on 6-7 shooting from three-point range.  The Nets are coming off an impressive road win in Indiana last night, but the Raptors nevertheless enter tomorrow’s matchup as the favorite.

Hello, I am currently a junior at UF studying sports media journalism with a concentration in Political Science. I contribute web and radio content weekly for WRUF ESPN Gainesville. Be sure to check out some of my recent articles!
Previous Stephen Curry looks to March for return
Next Lightning Win is Nice, but Not Redeeming