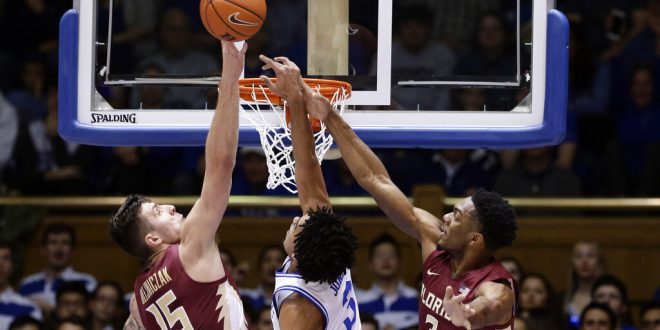 Following a three-game win streak, FSU was determined to make a stand against fellow ACC giant, Duke. Unfortunately for the ‘Noles, a subpar shooting percentage coupled with Duke’s defense led to an ultimate loss. Shooting below their norm was FSU’s ultimate undoing during yesterday’s game.  Normally, the Seminoles shoot 45.7% from the floor, but yesterday only managed 37.9%, down almost 8%. Add that on top of shooting 17% below their average free throw percentage per game.

Combined, the two made 35 field goal attempts, nine of those being from behind the arc, and only making 40% total.

Standing Tall in the Second Half

FSU’s defense showed off its ability to box out an opponent, especially one as dominant as Duke.  The Seminole’s defense was slow to start, however, allowing Duke to take an early 11-2 lead in the first minutes of the game. After coming off of an overtime victory against North Carolina, Duke gave up a season-high 21 turnovers to the ‘Noles.

The ‘Noles managed to make a statement despite a tough opponent, proving that by forcing 30% of Duke’s possessions to result in a turnover. This game against the Seminoles left Duke with their third-lowest scoring game of the season, offering a testament to how worthy FSU is as an AP Top 10 team. Later in the game, a divisive foul for Matthew Hurt brought him to the free-throw line, where he made both buckets to end the game 70-65.

Yes, considering Hurt never elbowed him. Hurt got fouled and Forrest got hit by his own guy pic.twitter.com/6YNL4QNbct

Overall, the Seminoles fell short of what would have been a stunning victory. They’ll have the chance to prove that their team can learn from their mistakes on Saturday, February 15, when FSU hosts Syracuse at home for a noon game.

@the_yudin
Previous Lightning Win is Nice, but Not Redeeming
Next Betts now a Dodger after six seasons with Red Sox