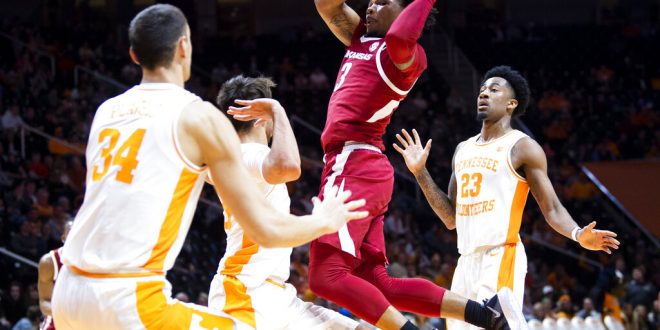 Yes, this game is an important road game for the Razorbacks, but first-year head coach Eric Musselman has a little extra juice for this matchup. The Gators were responsible for upsetting Musselman and the Nevada Wolfpack last year in the first round of the NCAA tournament.

Matt Zimmerman, radio analyst for the razorbacks, joined Sportscene with Steve Russell on Monday to talk about the impact that Musselman has had on the basketball team and the university.

Arkansas is 4-8 in SEC play, but the record does not reflect the effort. The razorbacks have lost a lot of close contests; an overtime loss to No. 10 Auburn and one possession losses to LSU, Mississippi State and South Carolina.

To beat the Gators on Tuesday, the razorbacks are going to need a big game from Mason Jones. The 6’5″ Junior has a hurt shoulder, but appears to be good to go for Tuesday night. Jones leads the SEC in scoring at 20.8 points per game, but his scoring has not translated to wins. Jones has scored 30 or more points in six SEC games. In those games, Arkansas is 1-5, including a loss to Florida last season. This season, Jones scored 40 in a 79-76 OT loss to Auburn and 34 in a 79-77 loss to South Carolina.

The O’Connell center is a tough place to play, but the game in Gainesville may be a welcome sight for the razorbacks. After the loss to Mississippi State, Arkansas is in the midst of a four game home losing streak, which is the longest for the razorbacks since they joined the SEC. Arkansas has not beaten an SEC team since Feb. 1, when they beat Alabama 82-78 in Tuscaloosa.

The Gators are coming off a night full of celebration on Saturday. Not only because they beat Vanderbilt handedly 84-66, but because former players were in town to officially name the court after Billy Donovan. Donovan was at the helm of the Gators program for 19 years. From 1996-2015, Donovan revived the Gators basketball team, including four Final Four appearances and two NCAA championships.

On the court, the team has to be encouraged with their shooting. It is safe to say the Gators have been streaky all year, but the team seems to have found a groove in recent games. One player who was hot from three on Saturday was Noah Locke. Locke knocked down 6 of his 8 shots from deep, which was a welcome sight for fans inside in the O’Dome. Additionally, when a team is knocking down shots it spreads the floor for the big men inside.

In this play, Vanderbilt is so concerned with the shooters on the perimeter that the middle is left wide open. Keyontae Johnson did not waste the opportunity. Kerry Blackshear Jr. had a nice day as well, scoring 15 points.

Florida hopes the shooting touch will continue into their next few games. The numbers are encouraging, as the points per game average is over 5 points higher during SEC play than non-conference games.