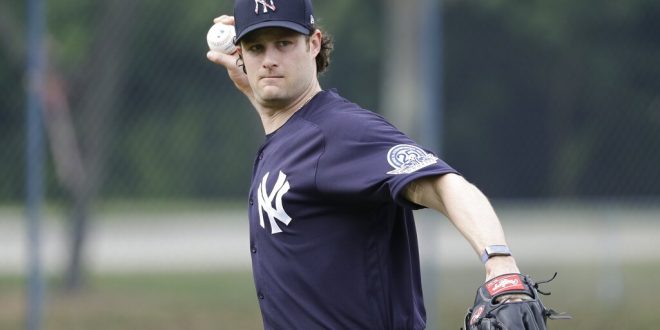 December 2019, Gerrit Cole signed a nine-year contract with the New York Yankees. The pitcher will make his spring debut against the Pittsburgh Pirates tonight, February 24 at 6:35.

Aaron Judge — outfielder for the Yankees — says that the news of Cole’s signing was exciting.

The 29-year-old was drafted first round in the 2008 MLB draft. However, he turned down the spot and chose to play college ball at UCLA instead. Then, in the 2011 draft, Cole went as the first overall selection to the Pirates. Afterward, he made his MLB debut in 2013 and was named Rookie of the Year that September. Later, he became NL Pitcher of the Month in April and MLB All-Star, both in 2015.

Between the 2017 and 2018 seasons, Cole was traded to the Houston Astros. Then, he started in 33 games last season for the Astros. After becoming the 18th pitcher in MLB history to pitch more than 300 strikeouts, he was traded to the Yankees.

His first time in pin stripes, Cole describes it as a brand new feeling.

In his first game as a New York Yankee, a new level of expectations are being placed on Cole. Though, teammates like Judge have seen how their new member practices and have high praise for him.

With tonight’s game being against his old team mixed with the excitement of his new start, Cole anticipates a different atmosphere. Now, he says that this will lead to some nerves.

Including Cole, the Yankees are up to eight pitchers in their starting rotation. All of which are returning to the Yankees from the 2019 season.

Severino started only three games in 2019 and had 17 strikeouts.

In his most recent season, Happ started in 30 games with no completions. He had 140 strikeouts out of his 2696 pitches thrown in 2019.

In his third year as a Yankee, Montgomery only started one game. He threw five strikeouts out of his 82 pitches in 2019.

The two-year player for New York started four games in 2019 and had 37 strikeouts from the fifteen total games he played.

King had his first season with the Yankees in 2019. He played in one game and threw 41 pitches with one strikeout.

Garcia has been in the Minors since 2016 and this upcoming season marks his first as a player in the MLB.

Rylee is a second year Journalism major with a specialization in Sports and Media at the University of Florida College of Journalism and Communications.
Previous College Hoops Rankings Shake Up
Next Coach K Wins 1,000th Game as a Ranked Blue Devil

Some things are bigger than baseball. Trey Mancini’s return to the Baltimore Orioles and to …