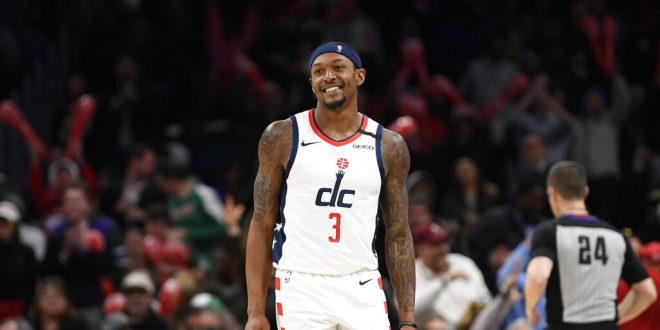 Washington Wizards guard Bradley Beal (3) reacts during the second half of an NBA basketball game against the Milwaukee Bucks, Monday, Feb. 24, 2020, in Washington. (AP Photo/Nick Wass)

While some of the biggest names in basketball history flooded the Staples Center in Los Angeles to pay tribute to one of the greatest to ever shoot a basketball, former Florida Gator Bradley Beal paid tribute in Washington.

On the night of Kobe Bryant’s memorial, Beal unleashed a career-high performance that matched a feat only Bryant had accomplished since 2007.

The Washington Wizards guard shot 19-33 from the field for 58% and 8-13 from three-point land while scoring over 40% of the Wizards’ points on the night.

Despite his dominant effort, Bucks’ superstar Giannis Antetokounmpo and the Bucks took the game in overtime, 137-134.

On Sunday, Beal erupted for 53 points in a loss to the Chicago Bulls and passed his previous career-high of 51 points, which was set in 2017.

That high lasted one day, as Beal’s 55-point scoring display on Monday made him the first player since Kobe Bryant to post 50-point games on back-to-back nights.

With the Wizards’ losses in the last two games, Beal matched another record. According to ESPN, he joins the company of Wilt Chamberlain, James Harden and Devin Booker as the only players in NBA history to score 50 points in consecutive games and lose both games.

Bradley Beal is averaging 36.2 points in the month February, including two career highs on back-to-back nights in which the Wizards lost. pic.twitter.com/FDK3U7ncpB

With the Wizards trailing the Bucks by 10, Beal re-entered the game with 7:50 to go in regulation.

It was then that Beal seemingly channeled his own Mamba Mentality.

He erupted for 22 points in the last seven minutes and 30 seconds of regulation.

He added seven points in the five-minute overtime period to bring his total to 55, which surpassed his previous high of 51.

Bradley Beal is the 1st player to score 50+ PTS in consecutive nights since Kobe in 2007.

This is how he feels about the career highs/losses: “Terrible, honestly. I’m a winner so you can throw those 55 out with the last 53.”
pic.twitter.com/C4aaFGC7L0

Beal’s Career as a Gator

After his freshman year, Beal declared for the NBA Draft and was selected by the Wizards with the third pick.

The Florida mascot is weighing in on Bradley Beal’s All-Star case… https://t.co/lbwoydvNmm

Beal’s two-night stretch of dominant play has not been seen since Kobe Bryant did it on March 22nd and 23rd in 2007. The then 28-year-old Bryant torched the Memphis Grizzlies for 60 points in a 121-119 victory. The next night, Bryant erupted for 50 in a 111-105 win over the New Orleans Hornets. Those two games capped off a four0game stretch where Bryant scored at least 50 points. He added 65 and 50 points in the two prior games, which were not played in consecutive days.

While Beal mirrored Bryant’s play on the court the last two games, he said that he doesn’t believe that it is as significant as creating a similar impact to Bryant off-the-court.