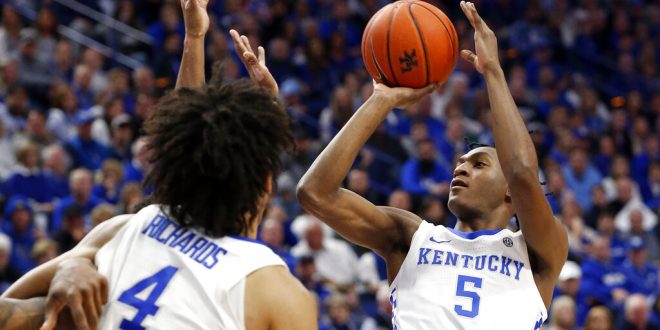 Not only does Kentucky hold the best record in the SEC, but it have now climbed higher in the top-10 rankings. Head coach John Calipari is continuing the winning tradition with the No. 8 Wildcats in strengthening their odds to win the tournament. But could they be facing a potential upset on Tuesday night to an SEC underdog?

Wildcats Clawing Their Way to the Top

After extending their win streak to six with a win over Florida on Saturday, Kentucky will try to continue to dominate the rest of their conference games to close out the season.

The Wildcats are nothing short of phenomenal at this point in the year, only losing two games within two months – to Auburn, South Carolina. Kentucky is one of the top three teams defensively in the SEC, ranking second in blocks and steals, and third in rebounds. They are also a threat offensively as they lead the conference in assists per game and have the second highest field goal percentage. However, they are one of the lowest scoring teams in the nation. If these Wildcats want to make this season stretch, they will have to find out more efficient ways of putting points up.

Leader of the Pride

The biggest asset to the Wildcats this season has been star guard Immanuel Quickley. The sophomore was named SEC Player of the Week this week after scoring 26 points in the home win over the Gators. It was his seventh 20-point game this season, racking up four in February alone. Kentucky’s leading scorer could be they key weapon the team needs to have a strong chance in competing in the Final Four.

Texas A&M has struggled this season, with their record just above .500. But all hope is not lost for the Aggies. They are currently on a three-game winning streak after defeating Georgia, Alabama and Mississippi State. Fans were ecstatic as Reed Arena was nearly full of maroon shirts and screams of excitement in the win over the Bulldogs last Saturday.

The Aggies are 10-5 at home this season and have an 8-6 record in the SEC. This conference record ties them with South Carolina and Mississippi State for the fifth spot in the SEC rankings. The Aggies are hoping to make this their third consecutive home win with the help of the 12th man. They have won the last two out of three home games against Kentucky and are looking to shock the world in an upset.

Texas A&M has been growing tougher physically over the past few games and is raising reasons of concern for Kentucky. Their premiere shot blocker, Josh Nebo, ranks third in the SEC in blocks and was the main force in the Aggies win over the Bulldogs Saturday. Keep your eyes open for a strong defensive stance from Nebo and the rest of the Aggies on Tuesday night.

Huge game for both teams:

One looking to continue blue blood dominance, the other hoping to stay in the fight for tournament play! Only one will prevail.