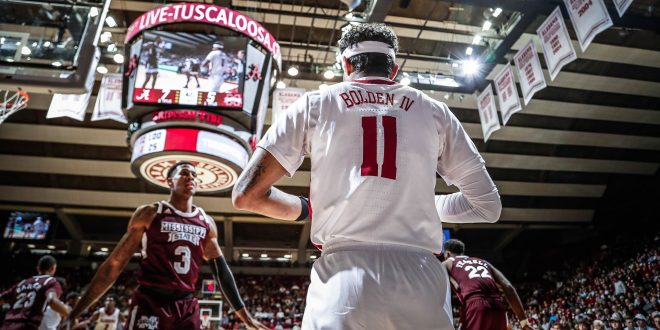 Alabama takes a trip to Mississippi State for one of their last road games of the SEC regular season it will come to an end soon. These two teams met earlier in the season in Alabama and it was the home team that came away with a 90-69 victory.

Alabama come into this game with an impressive win against Ole Miss, 103-78.  Leading scorer for Alabama is Kiar Lewis who is averaging 17.4 point per game.

This is an important game the Crimson Tide being that they are tied for ninth in the conference with Tennessee with a 7-7 conference record.

The value of this game can give the Alabama team a regular season sweep over Mississippi State giving that they had a 21-point victory over at the beginning of conference play back in January. This game is important for Alabama since it is its last chance to secure a spot in the SEC tournament as one of the top seeds.

With the season coming to an end and the NCAA tournament around the corner, this game and the few left can affect Alabama’s Big Dance appearance in March.

Alabama is the number one team in the SEC for scoring averaging 83.3 points per game.

The Bulldogs come into this game with a 75-87  loss against Texas A&M. The leading scorer for the Bulldogs is Reggie Perry who is averaging 17.3 points per game and also leader in rebounds at the forward position with 9.8 per game. In the last outing against Alabama, Perry manage to rack in 14 point and 5 rebounds, but that was not enough to defeat Alabama.

Mississippi State comes in as one to the top five teams in the conference trying to get to that fourth spot but they are in a three-way tie for fifth with South Carolina and Texas A&M.

Catch coverage of the game Tuesday on SEC network tip off is set for 9 p.m.