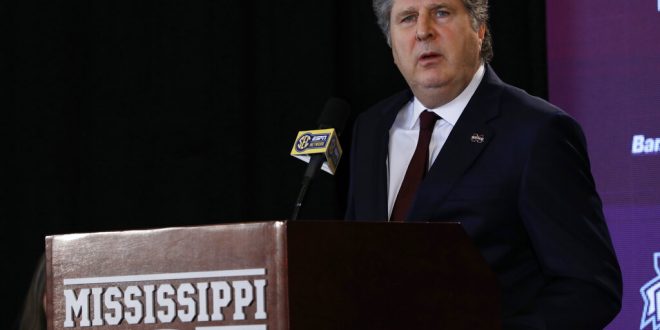 FILE - In this Jan. 10, 2020, file photo, new Mississippi State football coach Mike Leach, speaks before reporters and school supporters at the university in Starkville, Miss., after being officially introduced as the head coach. Leach apologized Thursday, April 2, 2020, for a tweet that displayed a meme of a woman knitting her husband a noose as they were self-quarantined. Leach removed the tweet, which was posted Wednesday night. He posted on Twitter that he didn’t mean to offend anyone. (AP Photo/Rogelio V. Solis, File)

Anyone who follows Mike Leach on Twitter knows that he uses the platform for comedic purposes. However, last Wednesday, the newly hired football coach made a controversial joke and quickly removed it.

In an effort to bring humor to the ongoing COVID-19 pandemic, Leach tweeted a picture he found funny. The picture showed an elderly lady knitting a noose with a caption that read, “after two weeks in Quarantine with her husband, Gertrude decided to knit him a scarf.”

Leach tweeted that image on Wednesday, April 1 and deleted later that night.

I sincerely regret if my choice of images in my tweets were found offensive. I had no intention of offending anyone.

“No matter the context, for many Americans the image of a noose is never appropriate and that’s particularly true in the South and in Mississippi.”

While Cohen made it clear that Leach’s tweet was insensitive, he has also stood by his coach and showed his support. Confident in Leach’s ability to overcome this mistake, Cohen said that he will participate in listening sessions. Leach will hear from students, alumni and community groups to expand his cultural awareness.

Having the support of the athletic director is big, but Leach needs to regain the support and trust in his team. One player, Fabien Lovett has decided to transfer out of the program following the tweet.

There is no other coach like Leach in the NCAA or NFL for that matter, and it is important that the new head coach can put this issue behind him and lead his new team.