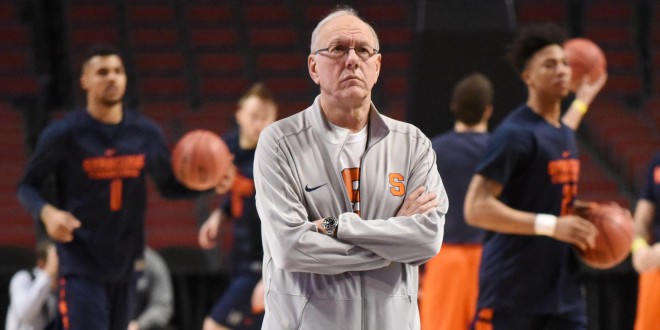 In these uncertain times, many of us find ourselves reflecting on when our favorite player won MVP or when our team won their respective championship.

Among those reminiscing is Syracuse Head Coach Jim Boeheim, except he coached a championship team in 2003. Seventeen years ago yesterday, the Syracuse Orange defeated the Kansas Jayhawks in the NCAA Tournament Championship by a score of 81 to 78.

On April 7, 2003, a freshman by the name of Carmelo Anthony led a Syracuse team consisting of only two seniors to the program’s first NCAA National Championship.

Syracuse’s run, as well as the game itself, was one for the ages.

Boeheim mentioned the importance of freshman on his roster. Led by Carmelo Anthony, the Orange started three freshmen and a sophomore throughout the season. Syracuse set a new standard that experience and seniority are not the end-all factors.

In that championship game, one of the head coaches would be receiving their first championship. Boeheim had been to the title game twice (1987 and 1996), while Kansas’s Roy Williams finished runner-up in 1991. Kansas fielded a roster of five future-NBA players compared to Syracuse’s two.

The actual game was tight throughout, with Syracuse’s Gerry McNamara (freshman, of course) knocking down six three pointers in the first half. Despite an 11-point lead at halftime, Roy Williams’s Jayhawks continued to pick away at the Syracuse lead to make it a three-point game in the dying seconds. Syracuse’s Hakim Warrick blocked a three point attempt out of bounds, and Kansas’s Kirk Heinrich airballed an off-balance three as time expired.

Not to be outshone by McNamara’s 18 first-half points, Carmelo Anthony finished with a game-high 20 points. Anthony also led his team in rebounds (ten) and assists (seven). Leading his team in points and rebounds in each game of the tournament except one, Anthony received the Most Outstanding Player award.

Boeheim reflects on the importance of his young star on their historical run and everything since then.

For Boeheim and the majority of the Syracuse lineup, the 2003 run was their shining moment. Carmelo Anthony and Hakim Warrick were the only two to make it into the NBA. Warrick spent the back half of his professional career playing abroad.

His teammate Carmelo Anthony followed a different path. The Denver Nuggets selected Anthony with the third overall pick in the 2003 NBA draft. This draft also had future Hall of Fame players including LeBron James, Dwayne Wade and Chris Bosh. Although Anthony has yet to lift the Larry O’Brien trophy, he has made a name for himself at the five teams he has played for. Most recently, he revamped his career with the Portland Trailblazers until COVID-19 halted the 2019-2020 NBA season.

This is perhaps more applicable to his former star player and leader at Syracuse. When sports eventually do return, Boeheim and Anthony will look to capture that championship feeling again, just in different leagues.

Originally from Seminole in the Tampa Bay area, Kyle is a contributor for ESPN Gainesville as well as local NPR and PBS affiliate WUFT. Kyle wants to get into sports with a lofty dream of being a sports broadcaster. He was raised playing soccer and baseball while watching hockey and football, so the knowledge about various sports is fairly extensive.
@KyleFanslerUF
Previous Mississippi State’s Mike Leach Reprimanded For Recent Tweet
Next Cal Ripken Jr. relives Iron Man moment