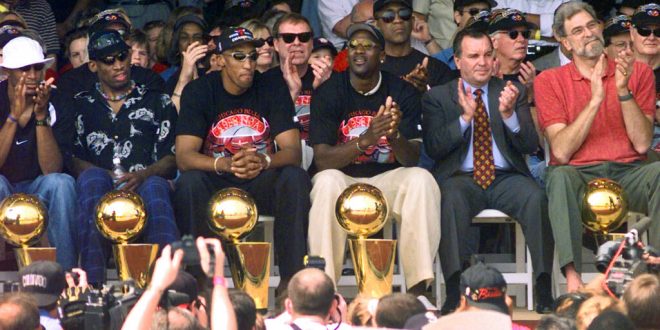 FILE - In this June 16, 1998, file photo, NBA Champions, from left: Ron Harper, Dennis Rodman, Scottie Pippen, Michael Jordan and coach Phil Jackson are joined on stage by Chicago Mayor Richard Daley, second from right, during a city-wide rally in Chicago to celebrate the Chicago Bulls 6th NBA championship. Jordan described his final NBA championship season with the Chicago Bulls as a “trying year.” “We were all trying to enjoy that year knowing it was coming to an end,” Jordan told Good Morning America on Thursday, April 16, 2020. (AP Photo/Beth A. Keiser, File)

NBA Players React to Michael Jordan and “The Last Dance”

Michael Jordan and the 1998 Chicago Bulls are regarded as one of the greatest dynasties in the National Basketball Association.

On Sunday night, ESPN Films took fans behind the scenes of one of basketball’s greatest teams in Episode One and Two of their new documentary miniseries “The Last Dance.”

The 10-part docu-series gives an inside look into Jordan’s final season with the Bulls. The series includes behind the scenes footage and interviews from players, coaches, and those closest to Jordan.

With the sports world on standstill, “The Last Dance” gives fans their much-needed fill of scheduled competition.

It may not be live sports, but the excitement surrounding the premiere of the “Last Dance” could compete with the NBA Finals.

Reactions Across the NBA

The popularity of the 1997-1998 Bulls is almost incomparable according to former NFL player Amhad Rashad.

The Bulls fandom spread out far beyond the Chicago area. According to Rashad, it was as if the Bulls were the Beatles.

The Bulls’ popularity heightened in 1998 after Chicago won their third consecutive championship.

The fascination behind the Bulls’ three-peat continues to impress fans today.

Warriors head coach Steve Kerr shared his thoughts on the premiere. During his NBA playing career, Kerr earned five championships playing alongside Jordan and the Bulls.

Kerr hopes fans remember how different NBA basketball was in the 90’s and how dominant of a player Jordan was.

You can watch Episode Three and Four next Sunday at 9 p.m. on ESPN. The documentary miniseries will be available for streaming on WatchESPN.com.

Netflix will also have the series available after the original air time.

The docuseries will continue until May 17th, with two episodes airing on ESPN on Sunday nights at 9 p.m.