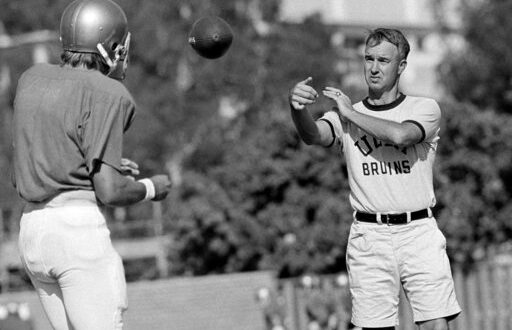 FILE - In this Sept. 13, 1972, file photo, UCLA quarterback Mark Harmon, left, son of former Michigan Heisman Trophy winner Tom Harmon, works out with coach Pepper Rodgers, right, in Los Angeles. Rodgers, a colorful personality who helped Georgia Tech to an unbeaten season as a player in 1952 and went on to coach the Yellow Jackets as well as Kansas, UCLA and in the United States Football League, died Thursday, May 14, 2020, at the age of 88. His alma mater announced his death. A statement from Georgia Tech said Rodgers died in Reston, Va. No cause was given. (AP Photo/GB, File)

The sports world is mourning the loss of an iconic college football figure. Pepper Rodgers, best known arguably for his days as a player, coach at Georgia Tech, passed away May 14 at age 88.

Rodgers touched a number of people’s lives over the years, including Florida’s very own Steve Spurrier.

As member of the Georgia Tech football team, Rodgers spent most of his time rotating between kicker, quarterback. He helped lead the Yellow Jackets to a perfect (12-0) record in 1952 that was capped off with a 24-7 win over Ole Miss in the Sugar Bowl, according to an article on Fox News’ website.

Rodgers was also a member of the Georgia Tech team that took home two Southeastern Conference Championships. The Yellow Jackets won three significant bowl games, and finished with a 32-2-3 record in his three years on varsity, according to the article.

After spending his college tenure at the school as an athlete, Rodgers made a return back to the Yellow Jackets in 1974. This time as head coach.

Roughly four years later in 1978, a young quarterback’s coach who had just been fired at the University of Florida received a call about a possible opening on Rodgers’ staff. The coach was Spurrier.

The following year around midseason, Spurrier recalled the tough start Georgia Tech had gotten off too. He said he went to Rodgers and told him he might be able to fix some of the issues by taking over the play-calling.

Of course, as Spurrier mentioned, he went onto secure an offensive coordinator position with the Duke Blue Devils after one season in Atlanta with the Yellow Jackets.

After being fired in 1979, Rodgers finished his Georgia Tech career with a record of 34-31-2 in six seasons, according to the Fox News’ article.

Rodgers also spent time at Kansas, UCLA, and both Memphis teams in the CFL and then USFL (United States Football League). While with the Jayhawks, he boasted a 20-22 overall record in four seasons.

It was during his time at UCLA that Rodgers introduced a new, flashy offensive system known as the wishbone. After struggling during his first season, the Bruins found their groove and went onto finish runner-ups in the Pac 8 the following two years.

While Rodgers spent most of his time in the college game, one of his last stops as a coach was at the professional level with the Washington Redskins working in collaboration with owner Dan Snyder.

It’s obvious Rodgers had a number of close friends throughout his life. One of those being Spurrier, who had continued to stay in contact with him years after the two went their separate ways in 1980.

In fact, Spurrier remembered one time where Rodgers actually attended one of the Florida-Georgia games while he was the coach at Florida.

For Spurrier, he said there’s no telling where he would have ended up if not for that job. That position laid the foundation for what would be a long, successful coaching career.