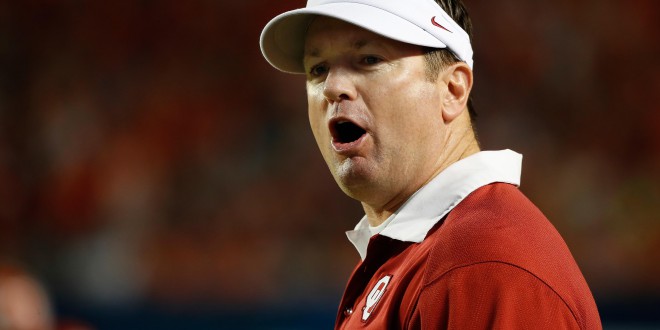 In college football, plenty of legendary coaches have roamed the sidelines in recent years. Bobby Bowden, Jimmy Johnson, Lou Holtz and Nick Saban are just a few on what seems like a never-ending list.

But one name that always seems to make the headlines, especially in coaching searches these last few years, is Bob Stoops.

Stoops has had a memorable career in coaching. However, he wouldn’t have made it to where he is now without some lessons early on in his profession.

After spending seven seasons as co-defensive coordinator at Kansas State under Bill Snyder, Stoops left the Wildcats in 1996 to take the defensive coordinator position at Florida. An opportunity that allowed him to learn under yet another illustrious coach in Steve Spurrier.

Stoops spent a total of three years in Gainesville. He helped Spurrier and the Gators bring the school its first-ever National Championship. Additionally, Florida also took home the SEC Championship crown that year and finished with a record of 12-1, (8-0).

It was moments like this one along with a great working environment that made Stoops’ time in Gainesville memorable.

Stoops went onto say that he received coaching offers from other schools following the Gators’ championship season but decided it wasn’t the right time to leave yet.

The decision to leave the Florida program ultimately came in 1998. Both the Iowa Hawkeyes and Oklahoma Sooners came knocking on Stoops’ door for a head coaching position. Stoops said the opportunity to lead a team was too hard to pass up and accepted the Sooners’ job.

It was obvious pretty early on in Stoops’ coaching tenure with Oklahoma that learning under two well-known, respectable coaches for close to 10 years had paid off. In just his second season, the Sooners had captured a perfect season and a National Championship in 2000.

According to an article on ESPN’s website, Stoops had 14 seasons with double-digit wins and brought Oklahoma 10 big 12 titles. Furthermore, he finished his career with the Sooners as the all-time winningest coach in the school’s history with a record of (190-48).

Stoops went onto lead the program to three more National Championship Game appearances, including in 2003 against the LSU Tigers, 2004 against the USC Trojans, and in 2008 against the Florida Gators, according to the ESPN article. He also guided Oklahoma to its first College Football Playoff appearance in 2015.

After 18 seasons with the school, Stoops decided to step down as head coach in 2017. He said at that time it just felt like the best decision for him.

Stoops decided to make a return to football in 2019 when he was hired as the head coach and general manager of the XFL’s Dallas Renegades. The squad had a (2-3) record five weeks into the league’s inaugural season before the COVID-19 pandemic shut sports down back in March.

Too much downtime prompted the return to the sidelines, Stoops said. Becoming apart of the XFL also allowed him to cure that crave for competition he had before.

When asked if he would ever get back into coaching if it was the right job, Stoops didn’t shoot the idea down.

Could he possibly find his way back into college football? Only time will tell.