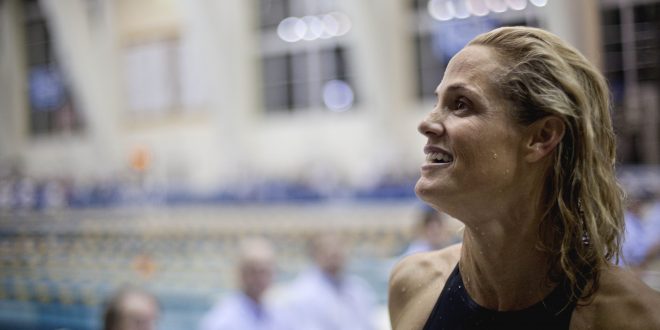 Former Florida Gators swimmer, and five-time Olympic veteran, Dara Torres appeared on Sportscene with Steve Russel yesterday. While on the show, she reflected on her time at UF and the Olympics and discuss where she is today. The now 53-year-old boasts an impressive 12 Olympic medals and is a former world record-holder for three events. At 41, she became the oldest swimmer to ever earn a spot on the U.S. Olympic Swim Team.

“My first thought was thank goodness that’s not me because in my last Olympics I don’t think I would have been able to train another year,” Torres said as she laughed.

All jokes aside, Torres feels great sympathy for the athletes going through this crisis.

“I felt really bad for the athletes. You’re whole life you train for this moment and you have that date in your head of when you’re going to try for the Olympic trial. It’s that goal and light at the end of the tunnel and now it has been ripped out from under you.”

Torres added that some athletes may benefit from the extension of training time. The older athletes will have to push their bodies a whole additional year.

Turning Back The Clock

Torres reflects on her childhood and the way that athleticism came so naturally to her. Torres initially was attracted to the sport of swimming by her brothers. They inspired her to give it a try.

“The minute I started to get good, they all kinda retired from it. I stayed in it because I just really loved the sport there was something about it that just made me feel one with the water,” she said.

Torres grew up in Los Angeles and even trained at the USC pool during her high school career. This made the University of Florida an unexpected choice.

“It was sort of a rude awakening, coming from LA where the weather is beautiful year-round, it was just very different for me, but I ended up just loving it there.”

Their very first Podcast occurred yesterday and where they interviewed Caeleb Dressel. Dressel is a former Gator who recently broken Micheal Phelps’ World Record in the 100m Butterfly.

“He came on our first podcast and one of the things we had spoken about before was that he had never met Tim Tebow, but really admired him. So I called Steve McClain, one of the sports directors at UF, and asked if he could get in touch with Tebow and see if he could do this podcast and surprise Caeleb.”

Dara Torres was able to get Tebow to surprise Caeleb. She said that once they started talking, they “kind of ran the show.”

This interview is already posted on YouTube, and the podcast will continue to be posted there twice a week.

Parker Welch is a Junior at the University of Florida majoring in Sports Media at the College of Journalism & Communications.
@parkerrwelch
Previous Nelson Maldonado Talks Baseball Career
Next Sneak Peak At The 2021 College Football QB Class With Anthony Threash