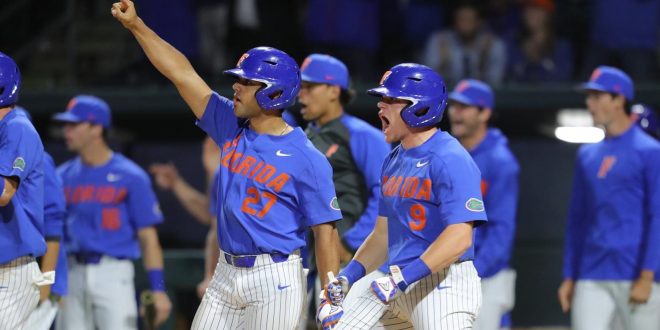 This week would usually have a certain meaning to it in college baseball. For the remaining teams in the NCAA Baseball Tournament, it would be the last chance to punch a ticket to Omaha for the College World Series. A dream every player hopes to one day fulfill as a kid.

But this year, it’s different. The COVID-19 pandemic has shut down spring sports, leaving some athletes to only wonder what could have been in 2020.

One guy who does know a little bit about playing around this time of year is former Gators baseball outfielder Nelson Maldonado. The four-year starter was apart of three-straight runs to Omaha from 2016-2018.  This includes one that was capped off with a national championship in 2017.

Some say the best memories are made while in college. For Maldonado, it’s almost certain this was the case.

In addition to starting every year and helping bring home the program’s first-ever national championship, Maldonado finished his Gators’ career has one of the best to ever take the field.

He played in a total of 258 games (good for third-best in school history), accumulated a final batting average of .292, hit 31 home runs and batted in 149 RBIs, according to the Florida Gators’ website.

Nelson Maldonado also just didn’t put the work in on the field. He did it in the classroom, as well.

According to the website, Maldonado was named to the SEC Academic Honor Roll in 2017, 2018 and 2019. Furthermore, he was also named to the NCAA Gainesville Regional All-Tournament in 2016 and received Fist Team All-SEC Honors in 2019.

It was quite the college career for Maldonado. He said some of his best memories were the friendships built along the way.

Maldonado also said he and his teammates were able to push themselves to limits they didn’t think was possible.

Maldonado graduated from the University of Florida in August of 2019 with a degree in Anthropology. The Chicago Cubs drafted him in the 21st round of the 2019 MLB Draft.

Shortly after his selection, Chicago designated him to their minor league rookie team, the Arizona League Cubs. Maldonado went on to appear in eight games with a batting average of .278, according to Minor League Baseball’s website.

About a month later, the Cubs assigned Maldonado to their Class A short-season cohort, the Eugene Emerals. He played in 15 games and batted in 11 RBIS along with one home run. According to the league’s website, Maldonado’s last move was to the Midwest League. He is currently a member of Chicago’s low-single A affiliate, the South Bend Cubs.

In 2019, Maldonado made an appearance in 33 games and totaled 17 RBIs along with one home run for South Bend, according to the league’s site.

Maldonado credited the competition level in the SEC for helping him prepare for the next level.

Moving Forward During the Pandemic

due to ongoing coronavirus concerns, it remains unknown if the minor leagues will have a season. Nelson Maldonado said he has been in communication with his squad, but the team has yet to hear plans about possibly getting back to action.

A lot of questions remained answered. And whether baseball gets played is arguably the biggest.

Sound used in this story recently appeared on Sportscene with Steve Russell.