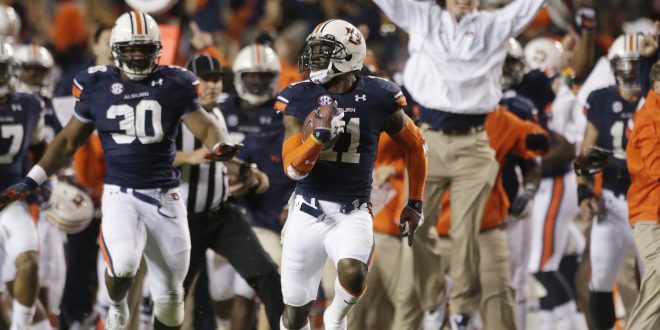 FILE - In this Nov. 30, 2013, file photo, Auburn cornerback Chris Davis (11) returns a field goal attempt 109-yards to score the winning touchdown over Alabama during the second half of an NCAA college football game in Auburn, Ala. Davis' 109-yard return of a missed field goal to beat Alabama was one of the Iron Bowl's and the season's most memorable plays. Alabama returns to the scene of Auburn’s Kick-Six on Saturday, Nov. 28, 2015. (AP Photo/Dave Martin, File)

On June 1, 2020, the world lost college football legend Pat Dye. Dye coached at Auburn University from 1981 to 1992. He took the Tigers to a whole new level of football and revived their program.

We remember the person he was and the indelible impact he left on the @AuburnFootball program. pic.twitter.com/CpkHgU57xZ

Pat’s time with the Tigers

While Dye may have played football as a Georgia Bulldog, he is remembered as an Auburn Tiger. Coaching for 12 years at the school and serving as Athletic Director for 11, Coach Dye tied for the second-most wins in school history. He finished with 12 winning seasons. Not to mention, he made it to 12 bowl games, winning six.

“Coach Dye changed the course of Auburn Athletics and Auburn University when he walked on campus. He personified the Auburn Creed.He impacted countless lives and continues to impact lives today because of who he was and what he wanted for Auburn. The entire Auburn family continues to benefit from him, ” said Jay Jacobs, former Auburn Athletic Director.

Auburn dedicated the Pat Dye Field is his honor at their home football facility.

Former Florida football coach Steve Spurrier faced off against Dye during his stint with the Gators. He shared on Sportscene with Steve Russell the memories he has of the late Auburn legend. Spurrier laughed at some of the funny things Dye said to him at all the meetings most notably encouraging Spurrier to take a new position at Florida.

“He said Steve when that Athletic Director position opens up, you should get it. I said “Get it? I don’t want to be an AD.” He said. “No you can get someone to do all the busy work, but as an AD you can make final decisions about a lot of things around there,” laughed Spurrier.

One of the biggest things the Georgia native accomplished was getting Alabama to play the Tigers at Auburn. After many years of playing them on their turf and in Birmingham, he brought the Tide to Auburn’s stadium to play Tiger home games. In 1989, the two teams faced off on Auburn’s turf, where the Tigers came out victorious.

Turning the tide for the Tigers

Dye will be remembered for returning Auburn to national prominence. On top of that, Dye coached several college stars who went on to be famous athletes, like Heisman winner Bo Jackson. Auburn play-by-play announcer Andy Burcham also chatted with Steve about the legacy of Pat Dye.

The Tiger coach may not be a household name to everyone, but to Auburn, he is the man that took them to a new era of football success.