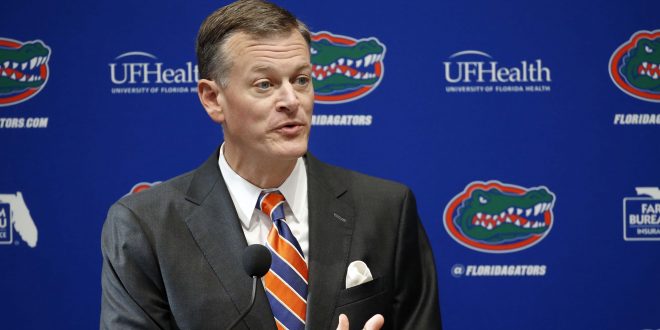 Florida AD Scott Stricklin is Awarded AD of the Year

He was recognized for his accomplishments spanning from March 1st, 2019 through February 28th, 2020. He was up against four other finalists for the title, including Texas Tech’s Kirby Hocutt and Baylor’s Mack Rhoades.

This is Stricklin’s second national award, also receiving the 2015-16 Athletic Director of the Year Award from NACDA.

The Gators had an impressive year. In that span of time, Florida won six conference championships in a variety of sports, as well as finished third in the 2018-19 Learfield IMG College Directors Cup.

During Stricklin’s time at the University of Florida, 587 athletes graduated, with 246 earning a national or conference championship during their time as a Gator. 341 student-athletes earned Academic All-SEC honors.

The October 2019 NCAA Graduation Success Rates showed that 88% of Florida Gator student-athletes completed their degree. Ten Florida teams were above the national average for their sport in the graduation success rate. UF student-athletes reported a 3.12 GPA in the fall of 2019.

He has also continued his progress on the Facilities Master plan. This plan includes the addition of the Gary Condron Family Indoor Practice Facility and the renovations to the Exactech Arena.

University of Florida’s President Kent Fuchs commented on the win via a press release:

“I can’t imagine a more deserving recipient of this award than Scott Stricklin. He is an exceptional athletic director who has guided UF’s student-athletes to new heights athletically and academically, significantly strengthened our athletic program and is proving remarkably adept at leading the Gators in overcoming all the difficult challenges of COVID.”

Stricklin promoted safety during the pandemic by working with UF health to administer 2,470 COVID-19 tests for athletes on campus. The athletic department was quick to quarantine when cases did arise.

With the return of students for the 2020 Fall semester, a spike in cases did occur. A case was reported on the football team on September 9th, with six more reported on the 15th. There were only three new cases on the 22nd and none on the 29th.

Sara Dastgerdi is a current student at the University of Florida.
Previous Marlins defeat Cubs, Rays defeat Jays in a winning night for Florida teams
Next Brian Johnson’s Debut as Florida’s OC a Successful One